Innovative therapy in the treatment of various cancers 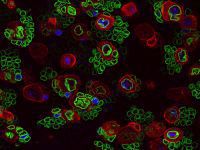 Various studies and experiments conducted on mice, between 2011 and 2014, have proven the effectiveness of the molecule Redaporfin, discovery of the Universidade de Coimbra (UC) for treating various types of cancer by photodynamic therapy, an innovative therapy to target and eliminate cancer cells.

In the performed tests, 86% of mice with various tumors were treated with this technology, and following stringent safety protocols, were cured and there were no side effects as with conventional treatments such as chemotherapy. The study, which has just been published in the European Journal of Cancer, also showed an extremely low relapse rate of the disease, revealing the effectiveness of the drug.

Tests conducted in animal models formed the basis for the planned architecture of clinical trials that Luzitin SA is carrying out with patients with advanced cancer of the head and neck. The most notable of these tests is the fact that "they predicted with accuracy when the response to treatment would arise, with what doses and in what circumstances the therapeutic effect would be obtained in the patient. These estimates are to be confirmed in clinical trials in progress", says professor Luis Arnaut, director of Medicinal Chemistry in this project.

This confirmation is exceptional because, explains researcher at UC, "Whereas there are very different realities, in most studies much of the knowledge acquired in animal testing is not confirmed in humans. But in this case it was possible to reach the appropriate dose for therapeutic outcome in patients with no adverse effects, as expected."

Due to the fact that the trials are ongoing with cancer patients in Portugal's hospitals until the end of the year, the results now known and scientifically validated "underline the expectation that photodynamic therapy with the Redaporfin molecule proves more effective than conventional therapies", says Luis Arnaut.

A large part of the journey is made and, therefore, the professor believes that this drug, the first Portuguese drug for cancer treatments, may be on the market "within three to four years." The investigation, started more than a decade ago, involves nearly four dozen researchers, from the groups of Luis Arnaut and Mariette Pereira of the University of Coimbra, the Luzitin SA company created to develop this project, and IPO (Portuguese Oncology Institute) of the medical team  in the city of Oporto.

Photodynamic therapy with Redaporfin allows a very effective method to fight cancer cells. The most innovative aspect of this treatment, also concludes the professor of the Department of Chemistry at UC, "is that the therapy stimulates the immune system of the patient, ie, the therapy limits the tumor metastasis process. Simply put, the immune system is alert and activates anti-tumor protection against the same kind of cancer cells elsewhere in the body."

The Luzitin SA was founded by Bluepharma and Redaporfin, the inventors which in 2010, conducted the preclinical studies for authorization to conduct clinical trials with Redaporfin and since 2014 there is to be held in Portugal a clinical trial phase I / II for  patients with advanced cancer of the head and neck. Luzitin SA is funded by Bluepharma and Portugal Ventures.