New device for the early detection of Pine disease wins biodevices International Congress 2013 in Barcelona. The technology is protected by patent and can detect Pine wilt long before physical symptoms appear.

A multidisciplinary team of researchers from the University of Coimbra (UC) and the Agrarian School of Coimbra (ESAC) has developed a device that enables to detect the pine nematode disease, known as pine wilt, long before symptoms show up.

The technology, already protected by provisional patent, has just been awarded the prize "Best Student Paper Award" at Biodevices Conference 2013, held in Barcelona, ​​an international conference that brings together top scientists and professionals from around the world, the most diverse knowledge areas, such as Physics, Medicine, Biomedical Engineering, and others.

Using the scientific method designated by Electrical Impedance Spectroscopy, a team led by Elisabeth Borges, PhD student in Biomedical Engineering at the University of Coimbra, has developed a device which is "very simple that allows quick access to the electrical signature of a biological material (any material, biological or not, has an electrical signature when stimulated by an alternating current or voltage), that is, it is possible to obtain information about the physiology of the material".

In simple language, clarifies the researcher, this method is "able to identify early if a tissue is healthy or damaged, the level of damage, etc.., which in the case of the pine nematode is particularly important because it can invalidate the advancement of disease and consequent cutting of pines. Currently, the techniques used do not prevent the killing of the trees: after detection and identification of nematode, the only solution is the immediate culling of pines and their destruction, according to the legislation in force."

The high value of the technology developed is that "it is minimally invasive, faster and financially advantageous compared to current laboratory techniques. With this device, which has yet to be optimized in order to enter the market, you can get a prognosis almost instantaneously" emphasizes Elisabeth Borges.

The device comprises two electrodes, placed on the trunk - an electrode injects a current signal or voltage and the other collects the signal generated by this stimulation - and a system of data acquisition, developed by the team, which converts these analog signals into digital signals for further analysis. Through analysis of the response to "tease" injected at multiple frequencies we obtain the electrical signature of the material. Seemingly simple interpretation of the signals is a highly complex process because the physiological response has many variants.

During the investigation, begun in 2010, young Pine were used. The team induced the disease in trees, collected and processed the responses. Now, researchers will also explore the use of this technology in the analysis of Jatropha seeds to produce biodiesel and food for assessing food security conditions. 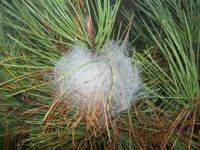