Researchers at the University of Coimbra develop Counterterrorism Vaccine 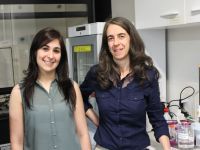 A research team from the Center for Neuroscience and Cell Biology (CNC) and the Faculty of Pharmacy, University of Coimbra (FFUC) developed a nasal vaccine for fatal threat scenarios of bioterrorism with anthrax, which may be given by any person in a situation of public danger.

It is not totally proved that the injectable vaccine, available in the Portuguese market only for the military, is 100% effective against fatal inhalation of anthrax in bioterrorist attacks, such as those that happened in the United States in 2001.

The nasal vaccine developed by the team at UC operates at the site where anthrax is inhaled, prevents infection from occurring and development of the disease at an earlier stage may be more effective than an injectable vaccine. The market introduction of such a vaccine could deter the use of biological weapons with anthrax.

The work of three years, led by a researcher at the CNC and lecturer at the Faculty of Pharmacy at UC, Olga Borges, gave rise to "a nasal anthrax vaccine which is inhaled that promotes the production of protective antibodies in the mucous membranes, forming a barrier to entry of Anthrax in the bloodstream."

"Muco-adhesive nanoparticles were developed, whose function is to stimulate the immune system by allowing it to respond more effectively to the presence of antigen (foreign to the body molecule) of anthrax. Nanoparticles also ensure that the vaccine is not destroyed by enzymes of the mucous membranes or which goes to the stomach, where it would be inactivated by acids," explains the researcher.

The World Health Organization (WHO) gives a high rate of infections in the use of injectable vaccines in developing countries, due to reuse of needles or lack of compliance with good practices during its administration, probably explained by the shortage of health professionals.

In these countries, especially in rural areas, anthrax is endemic (has not been eliminated), leading to infections of the respiratory system at the level of the skin and gastrointestinal problems resulting from direct contact with infected animals (domestic and feral), or through indirect sources such as wool, leather, bones and hair. Nasal administration of the vaccine does not present the risks of infection reported by the WHO and does not need to be implemented by health care professionals, lacking in developing countries.

The nasal vaccine developed at UC was successfully tested in laboratory animals, but further studies are needed to confirm its efficacy in humans. The developed formulation can be applied to other vaccines such as a vaccine against hepatitis B.

The investigation began to be part of a European project, proposed by the Portuguese Ministry of Defense and has been approved by the European Defence Agency. However, due to budgetary constraints and resets in the Ministry research areas, like the other countries of the consortium, the project ran out of financing for the defense area, and was supported by the Foundation for Science and Technology.