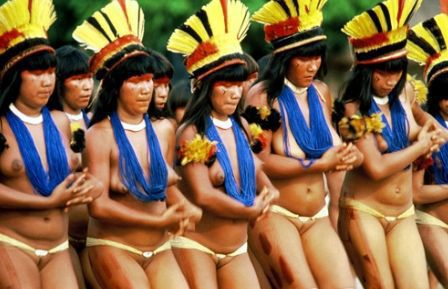 Xingu Indians win autonomy to place organic products on the Brazilian table. Small farmers are allowed to organise themselves to self-certify their products and deliver different, organic and high-quality products to consumers in Brazil, today and tomorrow who knows? The Indians are experts in producing biological foods without pesticides. We have a thing or two to learn...

The Participatory Guarantee system now adopted by the Association of the Xingu Indigenous Land (Atix) which allows groups of small farmers to organize themselves, to self-certify their products. When 10 indigenous people are invited to a public ceremony at the Ministry of Agriculture (MAPA) in the midst of a serious crisis between indigenous peoples and Brazilian government, it is good to stop and understand what went right for that to happen.

The reason for the meeting was the organic self-certification of the Xingu Indian Land Association (Atix) for food produced by the Indians last week. The Xingu honey has already been certified on the shelf of the Pão de Açúcar supermarket (one of Brazil's main food retail chains) since 2001, but the guarantee was granted by a private company, IBD Certifications.

Indians do not need pesticides

Brazil is the largest consumer of the world's pesticides, many of them banned in other countries. According to the Institute of Cancer in ten years, sales of pesticides in the Brazilian agricultural market increased from R $ 6 billion to R $ 26 billion. Currently, the country has surpassed 1 million tons.

In the case of the Indians, who have never used pesticides, the certification challenge was enormous when the only alternative is to use certification systems audited by specialized private companies and in so doing, incurring a high cost.

To become protagonists in the stand-alone certification of their organic products, the Indians of the Xingu Indigenous Park (PIX) had a unique setting. Its territory has been demarcated since 1961, the result of the work of Villas-Boas brothers. The protection of the area by the Indians made it one of the largest pockets of forest in the world. There are almost 3 million hectares in the state where there are the highest deforestation rates in the Brazilian Amazon, Mato Grosso.

Not everything is perfect and the Indians warn: "The park is surrounded," said the president of Atix, Yakari Kuikuro. "It is surrounded by soybean and corn and by poison," he added. The impact of the reserve surrounding deforestation already reaches 37% of the Xingu River Basin in Mato Grosso.

This complaint registered by the young President of the association in the ceremony at Atix is also present in the discourse of leaders and has been the motto of the campaign Y Ikatu Xingu, lasting more than a decade and has been starring model Gisele Bundchen.

The honey of the Xingu Indians is the result of a lasting partnership between ATIX and the ISA Xingu Program, which saw the MAPA initiative to democratize access to organic certification, an opportunity to respond to challenges posed to the old organization's certification system. Thus, the map allows groups of small farmers throughout Brazil to organize and to self-certify their products without the use of private certifiers.

The granting of participatory system to indigenous peoples is an important step in dialogue with indigenous peoples. Verification reports on the organic line, for example, will be able to be completed in the original language of each ethnic group and then translated into Portuguese by the teachers of the villages.

Besides the honey bee Apis mellifera, common in Brazil's markets, there are estimated to be a hundred species of bees known by the Xingu. In 2013, they received an invitation to attend the Intergovernmental Platform on Biodiversity and Ecosystem Services (IPBES, in English), a community of scientists linked to the United Nations to discuss solutions to the threats to biodiversity on the planet.

The honey from native bees of the Xingu is the chef of the restaurant menu Alex Atala.

Pepper produced and packed by the women of Kisêdjê ethnicity and pequi oil products are also in the queue that must be certified by Atix, enabling the country to meet and eat healthy foods which are produced in the woods.

Prepared for publication and edited, added to