Amazonian Indians speak out for their rights

Following is a letter written by the representatives of the sixteen ethnic groups on the Xingu Indigenous Territory in Brazil, where they speak about their cultural festival, their fears and their rights, while their territories are eaten away by "progress" and "prosperity".

Translation from the Portuguese version of Pravda.Ru. Original in Socioambiental*. This translation presents excerpts from the original. 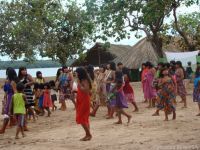 Ladies and Gentlemen, authorities and indigenous leaders, indigenous teachers, caciques, shamans, youth, children, women and every participant in the community 50 years of Xingu culture. We, the 16 ethnic groups in the Xingu Indigenous Territory, hello to all present.

In these 50 years of the creation of the Xingu Indigenous Park (PIX), a process that involved important people, such as Noel Nutels, Eduardo Galvao, Darcy Ribeiro, Getulio Vargas and Janio Quadros among others, brought up the struggle of indigenous peoples of the Xingu, which always preserved the rivers, forests, and their own wisdom to live in harmony. They have valued their own culture and shown their wisdom to white man, their way of living in their territory peacefully shared with nature. The vision of non-Indian society looking at them as if they are unable, is wrong.

(Those who understand us) would, of course, be very sad today to see the construction of dams, tourism clandestine, deforestation, pollution, silting of rivers. Today we no longer have the Villas-Boas brothers to advise us and help us deal with and have influence with the elite in power, so we strengthen our own leaders.

Fortunately we have managed to obtain the rights to our territory, although at the time the politicians aimed to transform the park into a human zoo and the name "Indian Park" shows the idea they had. Right now, we want to emphasize that our land can no longer be called the Xingu Indigenous Park, but the Xingu Indigenous Territory (TIX). Listen and understand the indigenous reality the way it deserves, with the recognition of wealth and socio-cultural diversity it represents. Land, gentlemen, to the political world or the white man, as it is said, represents the land as ground, as fragments that do not represent the territory.
When we are talking about "Indian country", we are defending our territorial rights meaning not parcels of land but the rivers, forests, air and educational, cultural and linguistic diversity. 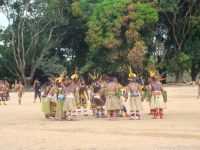 The great Indian warriors who fought here have ensured the future we see today because when no-one talked about indigenous education, they were fighting to understand the new language which came from outside and thus defend our rights. If we look back 50 years, it is not too far from our reality, but it makes us reflect on the past, present and future and set an example and show that without water, river, forest, without land as our ground and land as our territory, without all this diversity, there would be no indigenous society. There would be no languages, cultures, nor the peoples of the Xingu. The wealth of our territory is the reason we are alive, fighting to ensure the future of younger generations of the Xingu.

Here we are struggling at the present time and looking to the past to think about the future of our children and ensure the continuity of our languages, cultures, knowledge and ancient wisdom that the non-indigenous society wanted to take - both of our feet, our hands and our power for good or ill, do what they want with our area and are already doing to nature, through deforestation, pollution, dams, Belo Monte ... All in the name of what they call progress and development of the country's Growth Acceleration Program. 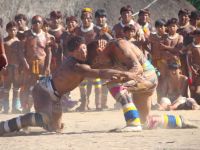 It is a future ecological disaster, nature and spiritually respond phenomenally, because nature is the life we ​​breathe.

Authorities, we want our territories to serve as an example of environmental, territorial, cultural and linguistic preservation. We respect progress and development, but want to be respected the same way that you have regard for your parents, your children, your friends and your home. The Xingu Indigenous Territory is our home, is our freedom to share with family, friends, animals, air, water forest, and the festivities. The territory of the Xingu does not belong to one people, but the 16 ethnic groups with different languages ​​and cultures, it is not the same as a plantation, or business owner of large acres of land.

We want to maintain the participation and recognition of youth, women, children and elders of our land.

With these words, and on behalf of 16 peoples who inhabit the Xingu Indigenous Territory,
We, the indigenous leaders of the Xingu, hereby send our message.

Signing this letter all the participants of the First Festival of Xingu Cultures in the village
Ipavu on days 10, 11 and 12 June 2011.

Note: The Portuguese version of Pravda.Ru hás partnerships with numerous human rights groups around the world who stand up for ethnic minorities, religious minorities and fight for gender equality, the end to homophobia, against gender violence and disrespect for the human condition.