May 13, 1888 - the Golden Law (Lei Aúrea) officially ended slavery in Brazil, some 350 years after the first Portuguese colony was established, following the discovery of Brazil by the Portuguese explorer Pedro Álvares Cabral in 1500. During those centuries, some four million Africans were taken away from their families and sold into slavery. 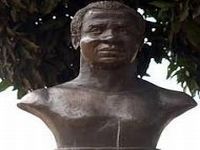 The history book is full of myths, one of these being the "discovery" of Brazil by the Portuguese in 1500, six years after the Treaty of Tordesillas (1494), in which the Portuguese and Spanish divided the world between them, and in which the Portuguese gave themselves Brazil two years after Christopher Columbus "discovered" (or found)  America, but six years before they discovered Brazil. There then ensued three thousand Portuguese fortresses built between Ceuta (Morocco), around the African coast, the Middle East, Persian and Indian Peninsulas, and the Far East. So was Columbus working for the Portuguese, leading the Spanish to Latin America and leaving the rest of the world to Portugal?

As it happened, the name "America" comes not from the Spanish or Portuguese, but rather from the Italian explorer and navigator Amerigo Vespucci (1454-1512), who was the first to call the "new" continent "Novus Mundus".

Whatever the details regarding the discovery of Brazil - named after the red colour of the trees along the coast, resembling embers ("brasas" in Portuguese) - the first Portuguese settlement was established in 1532 and the practice of shipping slaves from Africa began shortly afterwards.

This does not mean that indigenous peoples from the territory now called Brazil were not also forced into slavery - in fact, Brazilian Indians were being enslaved until at least 1750 but as the indigenous slaves proved increasingly unwilling to cooperate, more and more Africans were brought in. The slaves were used as the driving force behind the sugar economy (the main export of Brazil until 1650), then in the gold, silver and diamond mines (until the mid 18th century), and finally in cattle ranching, farming and plantations.

Redenção was the first municipality in Brazil to free its slaves. It lies 55 kilometers south of Fortaleza, in the northern state of Ceará. Redenção was a "senzala", or sugar plantation, which I visited in 2005. The building and conditions the slaves were kept in have been preserved.

The slaves lived, slept, ate, drank in a basement one point five metres high. When I entered, some 300 bats flew out past me and as I progressed into the slaves' quarters, I crouched lower and lower and started to feel and smell the horrific conditions they were forced to endure as they slept head-to-toe, after a voyage from Africa in which they were chained to the floor of the slave vessels, sitting in a sea of excrement for several months on end.

After creeping around for twenty minutes, bent double, I asked to enter the "punishment door" which was a wooden door opening onto a wall which had been excavated just deep enough to host a man standing upright. In those days, the punishment could be three days. I asked to be placed there for an hour, to feel first-hand what it was like to be helpless and to feel the ignominy of being held as a slave.

The guide closed the door on me and I told him to only open it after one hour. Almost immediately, a huge spider crawled across my face, then three giant cockroaches at least eight centimetres long ran up and down my body. After half an hour, an eerie silence preceded the appearance of a snake which coiled itself round my neck before slithering off somewhere to my left.

I felt the humiliation, the powerlessness and the hostility of my environment, for an hour. Let us imagine what those people went through day after day, week after week, month after month, year after year after being forcibly taken from their families and held in conditions of abject cruelty for the rest of their lives.

Photo: The slave liberator hero Zumbi, betrayed and murdered by the Portuguese (1695); decapitated, his head was salted and his penis was forced into his mouth. The Portuguese King Pedro II rewarded the perpetrator with the prize of 50.000 Reis.