According to exit polls, the Socialist presidential candidate obtained 45 percent of the votes and will surely be confirmed by the Congress in January

Two independent exit polls confirmed early in Sunday evening the dreams of millions of poor Bolivians: Evo Morales, the Socialist presidential candidate held an unexpecteadly strong lead over his conservative rival, Jorge Quiroga, which paves the way for his formal appointment as the first president of indigenous origin in the history of South America's poorest nation. According to official results, Morales, who has promised to become Washington's nightmare, obtained 49,8 percent of the vote, followed by Quiroga with 32,2 percent and Centrist Samuel Doria Medina 8,7 percent. 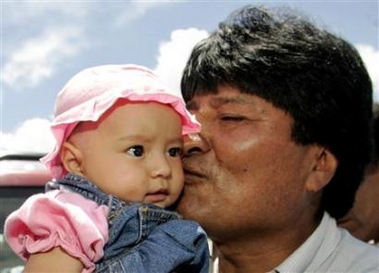 To become elected President directly – it means without Congress approval - Morales needs to get 50 percent plus one vote and, according to exit polls, he is very close to achieve it. The Socialist farmer leader has been backed by Argentina and Brazil, while White House has expressed its concern over his ties with Cuba's Communist leader, Fidel Castro, and Venezuela's leftist president, Hugo Chavez.

In his first public appearance after the first results were released, Morales thanked his followers and praised “a new time of justice, equality and respect” in Bolivia. Morales blamed the National Electoral Council for irregularities at poll stations and asked them to resign.

"If (the U.S.) wants relations, welcome," Morales said after voting, holding a news conference where piles of coca leaves were spread atop a Bolivian flag. "But no to a relationship of submission." Raucous celebrations erupted among Morales' supporters after nationally televised exit polls showed him with a decisive lead over former President Jorge Quiroga, who was backed by Bolivia's business elite.

Morales is the leader of the coca farmers, a poor class of peasants, that suffer from the US-backed anti-coca growth programs. The coca leave is used by the Bolivian people as a medicine and a traditional habit, but part of the production is being sold to traffickers as the raw material for cocaine.

After the exit polls were released, reporters at Morales' home in Cochabamba said he immediately received a phone call from Chavez. If Morales fails to win more than 50 percent of the popular vote, Bolivia's newly elected congress must decide the presidency — a parliamentary process that would involve some coalition building and likely be a moderating influence on Morales, even with his unexpectedly wide margin.

"I am the candidate of those despised in Bolivian history, the candidate of the most disdained, discriminated against," he said after working through a crowd of admirers — some of whom rushed forward to kiss him — before voting at a decrepit basketball court in the village school. He compared the struggle of his Movement Toward Socialism party to those of Indian leaders who fought Spanish conquerers, as well as to the independence hero Simon Bolivar and socialist icon Ernesto "Che" Guevara.

If Morales is finally elected President either directly or by the Congress in January, he will score a new turn to left in South America, following the experiences of Chavez in Venezuela, Lula in Brazil, Tabare Vazquez in Uruguay and probably Michelle Bachelet in Chile if she defeats the conservative coalition in the runoff scheduled for January 15.

Hundreds of international monitors made it one of the mostly closely watched elections in the country's history, and Sunday's voting was conducted under heavy police guard.

The winner starts a five-year term on Jan. 22 as Bolivia's fourth president since August 2002, succeeding caretaker President Eduardo Rodriguez, who was appointed by Congress on June 8, two days after street protests ended the 18-month administration of Carlos Mesa.

The final results will be released on Monday, but new exit polls aired by local radio stations say that Morales could even get 50,6 percent of the vote, which puts him in situation of being elected president directly.

Photo: Evo Morales kisses a baby shortly after casting his vote in a polling station in Cochabamba, the center of the coca production in Bolivia