Venezuela's President Hugo Chavez was widely expected to get full control of the National Assembly, as several opposition parties tried to boycott Sunday's legislative elections by withdrawing their candidates. Chavez, who dismissed the boycott as a failed plot to sabotage legitimate elections and avoid an embarrassing defeat, will have now free hands in the Congress to reform the Constitution, which may perpetuate him in power. 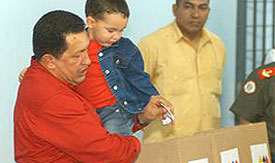 Since Chavez's victory was out of the question thanks to the withdrawal of the opposition, the center of attention was the level of participation. According to the National Electoral Comittee, the election was considered valid, as 25 percent of the Venezuelans went to the polls. The Venezuelan constitution says that the vote is valid when the amount of voters reach 11.25 percent of the list.

But as the number of voters was low, even for Venezuela poor standards in legislative elections, soon after the first results became known, the opposition claimed the level of abstention as a victory. The secretary-general of the Democratic Action Party, Henry Ramos Allup, said that the abstention was “high”, so “the new National Assembly is legal but not legitimate.”

"The whole world knows a true democracy is in motion here in Venezuela," Chavez had said after voting at a school where cheering supporters greeted him outside. Although Venezuela's main opposition parties announced they were boycotting the vote, Chavez noted only 10 percent of candidates had formally dropped out. He accused the United States, with which he often clashes, of being behind the boycott — a charge Washington has denied.

Chavez said traditional parties that withdrew would be responsible for their own demise, and he cited electoral figures showing that only 556 of more than 5,500 candidates had quit the race. "They are old parties that are already dead," Chavez said. He added that boycotting parties could emerge "not only delegitimized but also illegal." He did not elaborate.

The left-wing Mr Chavez's allies currently hold 89 of the single chamber National Assembly's 167 seats. Exit polls confirm the President will further expand his control over the Congress, but final results will tell how much power Chavez will grip since January 4, when the new Assembly will first meet.

Officials and election observers said the voting proceeded peacefully Sunday, while thousands of soldiers were deployed to keep order. The military said it stepped up security at oil installations to prevent any possible sabotage in the country, the world's No. 5 oil exporter.

Despite controls, government officials reported several disturbances leading up to the vote, including blasts from small explosives that injured three people in Caracas on Friday and a pipeline explosion Saturday night in the western state of Zulia.

Observers also noted that “apathy” among the population was the main characteristic of the vote, while participation was very important in the poor districts and low in the areas where the middle and the upper classes live.

Without electoral responses, the opposition leaders vowed to continue the fight against Chavez in the streets, but failed to provide with a plan to threat Chavez stengthened hegemony.

Photo: Chavez votes with his grandson, Manuel, in Caracas