Evo Morales, a leftist coca farmer, could become Bolvia's first-ever indigenous president if, according to polls, finally win Sunday elections. With a platform resting on ending the country's 20 years of free-market economic policies and the decriminalization of coca growing, Morales could, af he likes to tell the crowds that follow him, “change the history” in South America's poorest nation. 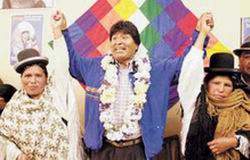 In an ethnically and politically fragmented Bolivian scenario, opinion polls say Morales could obtain up to 35% of the vote, followed by Quiroga, who may add up to 30% of the voices. According to the country's Constitution, a candidate has to obtain over 50% to become elected in the first round. Otherwise, the Congress is entitled to choose between the most voted candidates.

Morales' stance is rejected by Bolivia's upper classes and the oil-rich eastern regions of Santa Cruz de la Sierra and Tarija. On the contrary, Morales is strong in Cochabamba – his stronghold- and the main citis in the western regions of indian majority.

"If we don't win, neo-liberalism and colonialism will deepen," Morales cries. A wreath of potatoes, roses, and coca leaves hangs around his neck. "The time of dignity for the people has come."

Both, South America and the United States, are closelly following Bolivian events, as the country sits on a vast supply of hydrocarbons and the continent's second biggest reserves of natural gas. Chavez's Venezuela, Lula's Brazil and Kirchner's Argentina, support Morales, as Washington worries that if Morales wins, it will be yet another Latin American nation swinging to the left.

Morales said that if he wins, he will promote the integration of Bolivia with the Mercosur bloc, the trade pact that joins Argentina, Brazil, Paraguay, Uruguay and lately Venezuela. The Mercosur represents the biggest opposition in the region to the US-promoted Free Trade Area of the Americas (FTAA).

But, in the likely event that no candidate wins more than 50 percent of the votes Sunday, Congress will choose between the top two vote-getters when it reconvenes in mid-January. Analysts say this could bode ill for stability in a country which has had 83 presidents and about 200 coups and countercoups since independence in 1825. Massive street protests forced the last two presidents to resign.

The Army, a key institution in the event of political instability, has decleared that he will support the most voted candidate if wins with a marging of at least five points. The third runner Samuel Medina, with 8.9% of the votes, has taken a similar position. His seats in the Congress will be decisive to elect the new leader.

Photo: Evo Morales was the most voted candidate in 2000's elections, but the Congress chose Sanchez de Losada, a pro-US candidate, who was ousted by a popular rebellion in 2003.