Tony Blair and the EU budget

The draft budget has no mentioning of future EU enlargement

British Prime Minister Tony Blair has often had to please many people if not all. At times he had to please people that were at loggerheads with one another. That is what is happening these days. Britain holds the presidency of the EU till the end of this year, and the British PM must come up with the EU budget both the donor states and recipient state would agree upon. 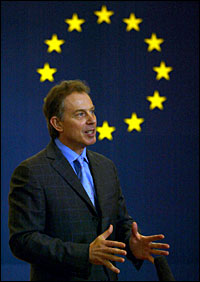 The original draft budget fell through earlier this summer during Luxembourg's presidency in the EU. The new member states from Central and Eastern Europe were asking for more money for themselves; France stuck to the policy of paying huge subsidies to the national agricultural sector, and Britain just refused to discuss a possibility of canceling its “discount.” Meanwhile, small-sized and efficient Western economies made statements about being fed up with feeding a half of Europe.

Then Tony Blair climbed the stage. Mr. Blair is known for his tendency to deliver impressive speeches in public. He declared that Britain would produce a new draft budget during its presidency in the EU. The new draft would purportedly satisfy all parties involved.

Mr. Blair unveiled the new draft last week. Given today's political realities, no radical alternations could have been included in it. Needless to say, expenditure has been cut, from 872 billion to 846,754 billion euros. However, budget cuts were at the expense of the budget items that should not have been affected by any cuts.

Mr. Blair had persistently called for the modernization of Europe. However, expenditure on innovations has been reduced in the draft which is unlikely to be adopted, though. The new member states that joined the EU last year would receive less money in accordance with the new draft budget.

It is worthy of note that the new British-made draft budget does not mention any spending cuts with regard to the integration of Romania and Bulgaria into the EU. At the same time, the East European countries largely hoped for additional funding as they joined the EU. Now their hopes seem to be ruined.

The draft budget has no mentioning of future EU enlargement. It is hardly a surprise for Turkey, though Croatia has been perplexed at the news. The EU experts had indicated before that Croatia had good prospects for joining the EU. Now it seems that Britain has made it clear that Croatia was not welcome to the EU until 2013.

Mr. Blair is apparently far too better at making flashy statements than resolving difficult issues. His draft project has effectively divided the EU countries into two groups, first-class and second-class customers. Under the circumstances, it is highly unlikely that his concept will get any support at the upcoming EU summit this week. The head of the British government keeps saying that it is just a draft that can be corrected and amended. Some British bureaucrats put the blame on Luxembourg which failed to have the budget approved during its presidency in the EU.