The Venezuelan President Hugo Chavez announced on Wednesday that he will not attend to a summit of the Mercosur bloc, as he plans to visit Moscow to meet his Russian counterpart, Vladimir Putin. At the same time, the Russian press agency Interfax reported that the Russian state-owned arms trader Rosoboronexport “does not rule out the possibility that new contracts with Venezuela could be signed during the upcoming visit of Chavez.” 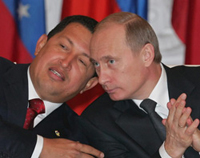 "Both counties are willing to continue cooperation, including the naval component but not only that. We have drafted many contracts on armaments for the ground forces but no final decision on them has been made," Rosoboronexport CEO Sergei Chemezov told Interfax-AVN at the Paris air show.

The Mercosur summit was scheduled for June 28 in Asuncion, the capital of Paraguay. Chavez was expected to attend to discuss regional issues with leader of Brazil, Argentina, Uruguay and Paraguay.

Since it became known that Chavez had chosen to confirm his visit to Russia, rumors about internal conflicts in the Mercosur bloc flooded news agencies and newspapers across the region.

Rumors are based in a recent dispute between Caracas and Brasilia about the closure of a critic TV channel in Venezuela. The Brazilian Senate criticized Chavez’s decision to interrupt RCTV emissions and Caracas reacted angrily accusing Brazilian senators of supporting US imperialism.

“Venezuela wants to become a full member of a new Mercosur bloc, but if it does not change for better, we are not interested in the old Mercosur”, said Chavez who remarked that the issue about the RCTV closure was “used in an attempt to justify other intentions”.

“It is not strange to see presidents missing summits. They are very busy”, said Marco Aurelio Garcia, a collaborator of Brazil’s Lula for international affairs.