Money is tight to mention for the United States

It is difficult at times to shake off the impression that America's foreign policy is utterly inconsistent. The latest example has to do with a new round of the debate about the ways of reforming the United Nations. This time the UN types are arguing over the funding plan of the organization. However, the United States seems to be using the need to reform the UN as a pretext for backing out of its commitments to contribute to the UN budget. 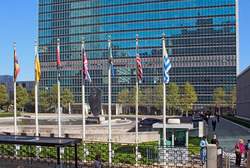 It is a well-known fact that U.S. administration is quite reluctant to finance the organization that is often opposed to America's intention to lay out directions for the world politics on its own. The U.S. ambassador to the UN John Bolton made it quite clear that a tough stance on finance stemmed from the fact that the largest international organization needed reforming.

It was announced at a special conference held in Washington this week that America's position was virtually a stumbling block to the UN budget approval. In their turn, U.S. diplomats suggest that temporary funding arrangements be made for three to four months at a maximum.

The United Nations would be reduced to a facade should the developments go the American way. As a result, the funding of nearly all substantial programs including peacekeeping operations would be put on hold. In accordance with a new draft budget, the United States was to cover 22% of a nearly $4 billion budget of the United Nations. Japan was to pay 19% and the EU was to pay a record amount equaling 40% of the UN budget. The UN's bureaucrats would nave nothing else to do but search for ways of making both ends meet if the United States does not allocate funds for the organization.

American logic is quite difficult to understand. The United States has been persistently pushing for reforms of the United Nations. If so, it is unclear how to conduct them with no money on hand. The situation is even worse since the countries that are ready to pay funds to the UN budget may not start sending money to the UN until the budget is approved in full. The budget will not be approved unless the United States gives its consent to it.

By all appearances, both the White House and State Department have realized that America's tough stance on the issue would not gain much of support to America's foreign policy. Therefore, a statement was issued to point out that the U.S. administration was bent on giving a boost to reforms, it did not aim not to ruin the organization.

Today everybody agrees that the United Nations should launch a reform plan. Today’s priority is not the enlargement of the Security Council, it is the UN’s efficiency improvement. Various control and audit bodies should play a major role in the improvement of efficiency. As regards the UN standing on the international scene, there is a plan to give it a boost by radically transforming Human Right Commission. The work of the commission has been actually brought to a stalemate due to some of its members that are the world’s worst violators of human rights.
It is time the United States took a decision on its priorities. Washington should finally decide whether it will blackmail the United Nations in terms of finance or join the process of reforming the organization.