The story of U.S. involvement with Saddam Hussein in the years before his 1990 attack on Kuwait is a topical example of the under-side of U.S. foreign policy

Almost all past U.S. administrations have one way or the other suffered from lack of prudent judgment. The present Bush administration, in particular seems to suffer from the most severe form of this syndrome. In addition to this, the present U.S. administration stands out among others with its extraordinarily strange 'political immaturity' and grave handicap in its faculties. Even the language of diplomacy seems to have suffered a lot. They have proven themselves to be incompetent in formulating prudent international strategies and tactics.

The virus of incompetence seems to have undergone rapid mutilation under George W. Bush's Presidency and turn into a plague of deception, creating incapacity, making it almost an incurable “birth defect,” to prevent any kind of prudent deviation from the disastrous path. The plague of deception in the White House has penetrated and interwoven so much so - quarantining of the infected “bad blood” alone seems useless. Full transfusion of the whole apparatus with 'new blood' seems to be the only lasting cure.

During the time of Saddam's power, Anti-Saddam activists, such as Ahmed Chalabi, (the present interim Minister of Oil) flocked to Washington to use America' interest to their personal advantage. They learnt from Saddam's experience and knew how easy to take U.S. administration for a ride, at U.S. taxpayers expense. 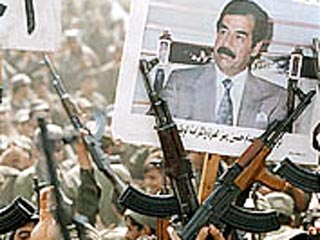 In his young age Chalabi has lived in Jordan, Lebanon, the United Kingdom and the United States. He got trained at the Massachusetts Institute of Technology and received a Ph.D from the University of Chicago. In 1977 while he was working as a lecturer in mathematics at the American University of Beirut, he was invited by Crown Prince Hassan of Jordan to establish a Bank in Amman. The Bank thus established was called the Petra Bank and it soon became the second-largest commercial bank in Jordan. Chalabi was caught embezzling funds through the Petra Bank in August 1989 the Jordan government seize the bank and its assets under martial law. Chalabi fled Jordan with over $70 million dollars to avoid arrest, but was prosecuted in absent and was sentenced to 22 years of hard labour. Chalabi was never arrested, but the $70 million fortune put him in touch with important people, most importantly with the people in CIA.

By October 1991 Chalabi had made contacts with many powerful figures in the CIA and White House. One of them was Richard Perle, who shared a podium with Chalabi at a conference held in American Enterprise Institute. The theme of the conference was "The Day After: Planning for a Post-Saddam Iraq."

In 1992, Chalabi organised the INC, Iraqi National Congress and since then he has been trying to drag U.S. to war with Iraq.

During Bill Clinton's presidency Chalabi's push for war in Iraq did not find much response from the White House. Generals and commanders in the U.S., who were well knowledgeable in the Middle Eastern affairs had no respect for Chalebi or INC. Retired Marine Gen. Anthony Zinni, former head of Central Command for U.S. forces in the Middle East, was reported as saying about Chalabi and INC as "silk-suited, Rolex-wearing guys in London,". About Chalabi's plans for invasion of Iraq, General Zinni added "I don't see any opposition group that has the viability to overthrow Saddam" and he added "the Bay of Pigs could turn into the Bay of Goats."

Nevertheless, Chalabi continued to earn handsome rewards by providing fabricated intelligence about WMDs in Iraq, which they knew did not exist. During George W. Bush's presidency this "intelligence" was code named "curveball" and was used byU.S. as "justification"for invading Iraq. The curveball has served its creators very well. They are the only party who has emerged as the clear winners in this game of deception.

Their win is threefold:

Firstly they milked the CIA by providing “fabricated intelligence“ - the “curveball,“ which since then proven to be a total fabrication, and it is the U.S. administration who is facing the consequence of this blatant deception.

Secondly by removing Saddam Hussein from power with the help of CIA and U.S. forces, the "curveball" fabricators, who never had a power base or public support in Iraq, managed to get their tentacles around Iraq's Oil resources and endless opportunities for profits from reconstruction, security and other contracts, which they could not have otherwise.

Thirdly by the virtue of their present positions of power in the Government of Iraq, they have reversed the roles in their favour, as now it is to their tune that the U.S. administration has to dance. The puppets not the puppeteers seem to be pulling the strings now. The U.S. administration in the process has traded one type of devil to another. The White House pandits do not see the history is getting repeated once again. Few years from now, U.S. will find out again that they have virtually been taken for another ride at their own expense.

Saddam remained in U.S. Administration's good books for a long time, enjoying the mutual benefits of the relationship until1990, when he started to put the language of aggression that he learnt from U.S. to practice by invading Kuwait. This is what Michael Dobbs, wrote in his article “U.S. Had Key Role in Iraq Buildup” in the Washington Post of 20th December 2002:

"The story of U.S. involvement with Saddam Hussein in the years before his 1990 attack on Kuwait - which included large-scale intelligence sharing, supply of cluster bombs through a Chilean front company, and facilitating Iraq's acquisition of chemical and biological precursors - is a topical example of the under-side of U.S. foreign policy."

"The U.S. policy of cultivating [Saddam] Hussein as a moderate and reasonable Arab leader continued right up until he invaded Kuwait in August 1990, documents show. When the then-U.S. ambassador to Baghdad, April Glaspie, met with Hussein on July 25, 1990, a week before the Iraqi attack on Kuwait, she assured him that [President George H.W.] Bush 'wanted better and deeper relations,' according to an Iraqi transcript of the conversation. 'President Bush is an intelligent man,' the ambassador told Hussein, referring to the father of the current president. 'He [George H.W. Bush] is not going to declare an economic war against Iraq.'"

"'Everybody was wrong in their assessment of Saddam,' said Joe Wilson, Glaspie's former deputy at the U.S. embassy in Baghdad, and the last U.S. official to meet with Hussein. "Everybody in the Arab world told us that the best way to deal with Saddam was to develop a set of economic and commercial relationships that would have the effect of moderating his behavior. History will demonstrate that this was a miscalculation."

A prominent US academic in political Science, Professor Irene Gendzier of the Boston University, wrote an article titled "Democracy, Deception and the Arms Trade” in the Middle East Report of March 2005. In this article she explains:

"Far more accessible, insofar as evidence concerning US complicity in weapons sales to Iraq, were the Congressional hearings that had taken place a decade earlier. Two were especially important: the inquiry of the House Banking, Finance and Urban Affairs Committee under Rep. Henry Gonzalez (D-TX) and the investigation of the Senate Banking, Housing and Urban Affairs Committee under Sen. Donald W.Riegle, Jr.(D-MI)."

"On October 27, 1992, the Senate committee heard expert testimony that revealed that dozens of United States firms, many holding United States export licenses, contributed directly to Iraq's ballistic missile and nuclear weapons program, let alone its chemical weapons. The same hearings revealed that the Commerce Department approved at least 220 export licenses for the Iraqi armed forces, major weapons complexes and enterprises identified by the Central Intelligence Agency as diverting technology to weapons programs. US officials could have no doubt as to the end users of such exports, since they knew their destination."

While delivering a speech to harp Bush's campaign for war against Iraq, the then Secretary of State, Colin Powell resorted to a 'shameless' act to incite fear on the UNO delegates by holding a phial of Anthrax in his fingers. But what he failed to tell then was if it was the Bush administration, which he was a part of who in fact armed Saddam not only with Anthrax, but many more Chemical and Biological nasties. People who willingly or unwillingly mislead the world will have no place in the history.

It was indeed the U.S. and France that facilitated the legal passage of these chemicals to Iraq, to be used by Saddam in his Biological Weapons program. Colin Powell is conveniently not in the White House today to face his own music. He must be having a relaxed early retirement enjoying a different type of music perhaps with glass of wine.

Interesting chain of facts related to American and French supply of biological agents is well documented in an article titled "Iraq Links Germs for Weapons to U.S. and France" by Philip Shenon, published in The New York Times of 16th March 2003. Philip Shenon reveals:

"A copy of the pages of the Iraqi declarations dealing with biological weapons was provided to the New York Times, and it reveals the full variety of germs that Iraq says it obtained from abroad for its biological weapons program. The document shows that the American and French supply houses shipped 17 types of biological agents to Iraq in the 1980's that were used in the weapons programs. Those included anthrax and the bacteria needed to make botulinum toxin, among the most deadly poisons known."

No amount of twisting and turning by the Spin Doctors of the White House, the waivers of the Anthrax phials, can free the US administration or the French from the guilt of their long criminal collaboration with Iraq in helping Saddam with his Biological Weapons program . These are the facts that the U.S. media giants do not have the decency or the courage to reveal to the public.

Taken from the report named U.S. Chemical Biological Warfare - related Dual Use Exports to Iraq, issued by the United States Senate Committee on Banking, Housing and Urban Affairs on 25th May 1994, are the following interesting details of U.S. dangerous liaisons with Iraq.

“In October 1992, the Committee on Banking, Housing, and Urban Affairs, which has Senate oversight responsibility for the Export Administration Act (EAA), held an Inquiry into the U.S. export policy to Iraq prior to the Persian Gulf War. During that hearing it was learned that U.N. Inspectors identified many U.S.-manufactured items exported pursuant to licenses issued by the U.S. Department of Commerce that were used to further Iraq's chemical and nuclear weapons development and missile delivery system development programs."