China to guide the USA in international politics

When George W. Bush launched his Asian tour last week, officials from the US administration assured the society that there would be no sensations or scandals made during the trip. 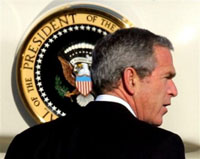 Everything was decent and quiet indeed: relatively mild criticism and appeals for cooperation. As a result, all actual questions pertaining to commercial relations, security and human rights issues, etc, remained unanswered.

That was exactly what the US government wanted from George Bush's official meetings with the leaders of Japan, South Korea, China and Mongolia. Despite the gravity of the past talks, Washington was concerned most about the meetings with Chinese leaders: Bush's two-day stop in China attracted global attention. Both the USA and China did their best to observe decencies, though.

Achieving a new qualitative level of relations between Beijing and Washington could open new perspectives for the two countries, although it is obvious that both the USA and China have to come to certain concessions in order to be able to achieve the common objective.

The US administration is concerned about the headlong development of China: its economic growth and military potential supposedly pose a serious danger to the USA's interests in the region. At the same time, another part of the American society hopes that the two countries will manage to co-exist peacefully in the Asian-Pacific region, balance out their forces and build up friendly relations with each other. It is not ruled out that George Bush tried to sound out such opportunities during his visit to China and try to convince his Chinese colleagues of the need to act accordingly.

The US president believes that China and the USA have common problems and opportunities in the 21st century. The two countries benefit from free and honest trade and will thus continue cooperation to open new markets for US goods and services, Bush said.

Chinese officials in their turn did not miss a chance to push the issue of human rights aside and talk business with the US president. China set out its willingness to purchase 70 Boeing 737 jetliners from the USA. This is apparently the first step for the two countries in the development of the mutually beneficial cooperation. Economic issues prevailed during the official meetings with Bush in Beijing: even the problem of the North Korean nuclear security was lost somewhere in the background.

Deputy Secretary of State Robert Zoellick said during his speech at the national committee for cooperation that the USA was going to use Beijing as the guiding line in its policies in the Asian-Pacific region. According to Zoellick, the USA is ready to view China as a powerful state in the region, with which it is willing and ready to build friendly relations.

One should bear in mind the fact that the US-Chinese relations are like a double-edged weapon. The USA stands up for the inseparable China, although it simultaneously supports Taiwan and irritates the Chinese government with its easy manners to conduct negotiations with Japan. The Pentagon, in its turn, is concerned about China's military potential.

Experts are certain that the relations between the USA and China will remain unchanged despite certain vestiges of mutual understanding, at least for the time being. The two countries have absolutely different cultural values, the Chinese President Hu Jintao believes. To crown it all, current intelligence scandals between the two countries do not give much hope for any future progress.

As for other states of the region, George Bush also had to experience a certain amount of disappointment there. Bush was going to talk about the question of free market at the summit in South Korea, although he could only receive a promise in return saying that the talks on the matter would be continued in the future. To make matter worse, the government of South Korea supported the suggestion to withdraw the majority of its servicemen from Iraq.