The International Committee of the US Senate has held yet another session devoted to the situation in the Middle East. The US Secretary of State Condoleezza Rice stated during the discussion that Iran and Syria were guilty of ongoing terrorist activities in Iraq. According to Rice, the US administration does not exclude an opportunity to strike the above-mentioned two states. 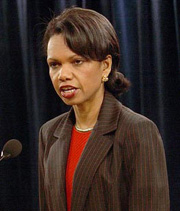 "Syria and indeed Iran must decide whether they wish to side with the cause of war or with the cause of peace," Rice said. According to the US Secretary of State, the two Mideastern states allow militants and military assistance reach insurgents in Iraq. Answering a question about a possible military operation against Syria and Iran, Rice said that the USA was still on a "diplomatic course" with Damascus but the military option remained open. "The President never takes any option off the table and he shouldn't," said Dr Rice when asked about a military option.

The US administration has been talking about a possibility of a war with Iran for 26 years already, since the time when the Islamic revolution occurred in the country. US officials have been reasoning the need to conduct a military operation against Iran with Tehran's nuclear program and the disagreement of the Iranian government to grant foreign inspectors access to its nuclear objects. This list has been added with notorious “international terrorism” accusations and Tehran's involvement in anti-American actions conducted by Muslim Shiites in Iraq.

It is noteworthy that Iran does make other states become concerned about its home policies. The newly elected president of Iran, Mahmoud Ahmadinejad, has recently started from a UN tribune that Iran was ready to share nuclear technologies with other Muslim states. As for the support of Shiites in Iraq, Russian specialists say that such a support is obvious, because Iran is a Shiite state. However, terrorists conduct bloodies attacks against the Shiite people in Iraq, although Washington prefers to turn a blind eye on it.

American officials recollected another neighbor of Iraq – Syria. It is true that a part of the Syrian population has ties with Iraqi Bedouins. In addition, Syria has been the historical enemy of USA's prime enemy in the Middle East, Israel. Unlike Saudi Arabia, for example, Syria cannot be described as a stronghold of Islamic fundamentalism. Syrian women may not wear veils or paranjas; a lot of Syrian Muslim females, including the wife of the Syrian President, Bashar al-Assad, do not even cover their heads, which is still impossible in Iran, for instance. To crown it all, Christians make up ten percent of the Syrian population; their rights are officially legalized.

If one takes an analytical look at the Arab part of the eastern world, Syria may seem to be one of the most open and secular states of the entire region. Women enjoy quite a handful of rights in Iran too: they can elect and be elected, they can study, work, visit resorts, etc. On the other hand, it is strictly prohibited to open Christian temples on the territory of the US's central ally in the Arab world – Saudi Arabia. People could not go to cinemas for 20 years there; the Internet still remains highly restricted. Wahhabism is considered to be the state ideology of Saudi Arabia (world's most wanted terrorist Osama bin Laden was born in Saudi Arabia too). The country annually assigns billions of dollars to various Islamic organizations; the money is subsequently used to perform terrorist attacks around the globe, in Palestine and Iraq, first and foremost.

Iran and Syria do have quite impressive links with the population of Iraq. Nevertheless, neither Damascus, nor Tehran have ever been Iraq's allies during Saddam Hussein's stay at power.

It looks like the USA is ready to use any reason to make Arab states carry responsibility for US-led actions, which made Iraq become the hottest of all hot spots on the globe.