Syrian President Bashar al-Assad is expected to release an urgent statement in the national parliament today. The president's speech will reportedly be devoted to the situation around Lebanon, Syria's neighboring state. It is not known yet, if Assad was going to announce the date, when Syrian troops could be withdrawn from Lebanon. Assad will most likely confirm his intention to withdraw the troops from Lebanon during the forthcoming months and raise the question of strengthening Syria's borders under these new conditions. 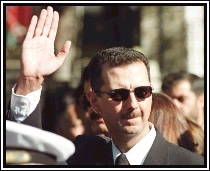 However, there is a possibility that the date to withdraw Syrian troops from Lebanon will be announced, taking into consideration the pressure of the West at this point. On the other hand, Damascus is probably trying to take time and strictly coordinate its withdrawal with international agreements to cease the civil war in Lebanon. The agreements were concluded in 1989. The documents stipulate that Syria will be removing its troops gradually. Furthermore, Syrian troops will have to be redeployed in Lebanon first, closer to the Syrian border.

Western leaders, however, interpret UN Security Council resolution 1559 (passed on September 2, 2004) as a regulation to withdraw 14,000 Syrian soldiers from Lebanon as soon as possible. The US President tries to do his best to make Syria leave Lebanon. British Foreign Secretary Jack Straw stated that Syria's obstinacy was making the international community treat the country as an outcast.

The Syrian administration decided to ask Russia for help. Russia is the only non-Arab country, which can be viewed as a Syrian ally. It is noteworthy that a spokesman for the Lebanese opposition is to visit Moscow next week.

The Syrian president visited Russia at the end of January. Bashar al-Assad and Vladimir Putin agreed to develop the economic, military and technical cooperation between Syria and Russia. Syria's Deputy Foreign Minister, Walid Muallim, arrived in Moscow yesterday to have a meeting with Russian Foreign Minister Sergei Lavrov and his deputy, Alexander Saltanov. Russian diplomats explained that the Syrian deputy had arrived for consultations: “It is not excluded that Syria will announce the start of its plan to withdraw the troops from Lebanon during the forthcoming days,” a spokesman for the Russian Foreign Ministry said.

The Lebanese opposition, which supports the West's pressure on Syria regarding its military presence in Lebanon, is sending its high-ranking official to Moscow as well. Walid Jumblatt, the leader of the Progressive and Social Party of Lebanon, is to visit Moscow on March 9th or 10th. The official will try to convince the Russian administration of assisting Western diplomats in their efforts to make Syria withdraw its troops from Lebanon.

Moscow fears that the fast removal of Syrian troops will result in a new civil war in Lebanon. Russian Foreign Minister Sergei Ivanov said in one of his interviews that Syria's military withdrawal should not break the complicated ethnic, religious and state structure in the country. The Lebanese people, however, do not think that Syria's presence is the central stabilization factor in the country.

Meanwhile, Syria is actively fortifying its territory, putting up anti-aircraft systems and other defensive installations. Such activity means that Damascus has already made a political decision to pull out from Lebanon.

Other Arab countries are pressing the Syrian government as well. Crown Prince of Saudi Arabia, Abdullah bin Abdel Aziz, has recently told President Bashar al-Assad that it would be difficult for the Arab world to back Damascus, if the Syrian administration was not going to take certain measures and leave Lebanon. Otherwise, the Prince added, the Syrian and Saudi relation might face serious problems.

Riyadh's severity can be explained with the fact that Syrian special services are suspected of being involved in the assassination of the Lebanese Prime Minister Rafik Hariri – a friend of many Saudi princes. Hariri's death triggered another conflict in the Middle East.