The goal of the US-led war in Iraq has been achieved: the former Iraqi dictator Saddam Hussein is on trial for crimes against humanity allegedly committed 20 years ago. The start of the trial has marked victory for the USA, although it is not the final defeat for Hussein. 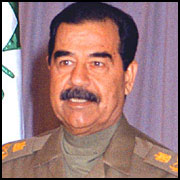 Lawyers said several hours before the trial that Saddam's morale was high and that he still refused to plead guilty to the charges. It goes without saying that the US administration does not have any doubts regarding the legitimacy of the trial. Hussein's lawyers, though, refer to the event as a political show and “pure theatre.” In spite of the fact that the trial has been postponed for ten days, it is already clear, which side is going to win it.

The Saddam trial has launched the new era in the history of Iraq: many Iraqis and White House politicians share this opinion. American officials emphasize, though, that it is a purely Iraqi process. It is up to the Iraqi nation to determine the fate of its former dictator: if Saddam Hussein is sentenced to death penalty, Baghdad will have to carry responsibility for the decision. James Jeffrey, a senior advisor to Rice on Iraq, stated at a press conference that the US administration was not going to exert any pressure on the trial upon the request of the Iraqi authorities. According to Jeffrey, Saddam Hussein cannot be considered an American prisoner of war.

The trail of Saddam Hussein is an unprecedented process indeed. Iraqi TV and radio companies broadcast the trial live, special services take unexampled security measures against the background of the current terrorist activities in Iraq.

The police cordoned the court building off; there will be special screens provided for witnesses to cover their faces, whereas the names of the judges still remain unknown. A special bullet-proof booth has been installed in the court room for Saddam Hussein, from which he is supposed to answer numerous questions from the judges.

First and foremost, Saddam Hussein is charged with acts of genocide, which he conducted against Kurds and Shiites. Yesterday's court session paid attention to events, which occurred in Iraq's small town of Dujail, a Shiite Muslim enclave 60km north of Baghdad, in the morning of 1982. Activists of the pro-Iranian party attacked Saddam's procession: the dictator stayed alive, although the attackers killed eleven of his bodyguards. The rebellion was suppressed only six days later. Soldiers swept into the town massacring 143 civilians; about 400 people were jailed and 250 other civilians disappeared without a trace. It is still not known what happened to those people. The rest of the town's population was forcibly evacuated, and the town itself was leveled.

The next episode of the charges is connected with the elimination of 8,000 people from the tribe of the Kurdish leader Massoud Barzani. The bloody events took place in the summer of 1983. Saddam's crimes committed in Kuwait in 1990 and 1991 take a special position on the indictment list too. The ex-president is likely to be sentenced to death penalty on each of the counts. The same refers to the seven accomplices of his, who used to take top official positions during the time of Hussein's power in Iraq.

It seems that there will be thousands of judges involved in the trial. However, there is only one lawyer to defend Saddam at court – Khalil al-Dulaymi. After hours of talks with the client, Dulaymi stated that he was going to ask the judges to delay the process to be able to prepare for the hearings better.

Many have expressed concerns that the former dictator will not get a fair trial. Abdul Haq al-Ani, the British-trained barrister appointed to defend Saddam, said it was going to be "a political show-trial.”

Western human rights organizations, Amnesty International, for example, protest against a death sentence that can possibly be issued against Saddam Hussein. Members of the organization believe that Iraq has the last chance to prove to the world that the country deserves respect. The majority of Iraqis, though, have a different approach to the problem: they hope that Saddam will be executed.