All US senators gathered for a meeting at the Senate last Friday, October 7. The senators approved the traditionally huge US defense budget. In 2006 the US administration plans to spend $445 billion to maintain its military supremacy in the whole world. However, even such a huge sum of money does not mean that the national security of the USA will improve considerably. 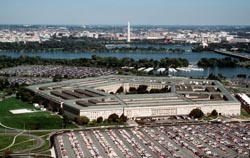 The long-standing American art of lobbying and evading laws will let the Pentagon receive extra money for its purposes in addition to the above-mentioned sum of the national defense budget.

The USA plans to spend $50 billion on the military campaigns in Iraq and Afghanistan. The current state of affairs in the two war-torn states suggests that the US military command will not be able to ease the situation there in the near future. It goes without saying that new difficulties connected with ongoing mutinies in Iraq, for instance, will require additional funding.

The Bush's administration pays attention to the national high-tech arms too: about $8 billion have been prepared for the notorious ABM program. It brings up the idea that Pentagon's top secret space projects will receive the appropriate funding as well.

It is obvious that the huge defense budget of the USA has been lobbied by those from large corporations operating in the field of military technologies. As a result, almost $85 billion will be spent on purchasing new weaponry, including planes and vessels (the preference will be given to US makers of arms, of course).

On the other hand, US war-planners pay attention to vital problems of the Pentagon as well. Needless to say that it is rather hard to think about militarized space when the US command can hardly cope with armed mutinies in Iraq.

About $622.5 million are to be spent on special programs to attract new recruits in the US Armed Forces, taking into consideration the fact that the service in the American army has become less popular but more dangerous.

US politicians could not help politicizing the approved defense budget, of course. It became known that the military spending was connected with US law-makers' requirement to treat the captured enemies of “democracy” (represented and promoted by US soldiers) humanly. What if the US military break the rules and stop treating the arrested terrorist suspects according to human rights norms? Will the US government take all $445 billion away from the Pentagon?

More importantly, how long will the world's strongest economy last with the constantly growing budgetary shortage? To make matters worse, the USA conducts extremely active foreign policies, which also require immense spending. However, when the US legislative authorities need to cut the budgetary spending, they basically cut the spending on US-led military activities abroad. It just so happens that the USA wages wars but it does not have enough money for them. To crown it all, the recent hurricanes, which struck the US Gulf Coast in September, showed that the world's most powerful country suffers from the lack of financial resources for home issues too.

You can discuss this article in Pravda.Ru Forum