Alejandro Toledo is supported by only eight percent of Peruvians

In an attempt to tackle what is considered the worst political crisis of his embattled four-year administration, Peru's President Alejandro Toledo is expected to name a new cabinet later this week, as his approval rating downs to eight percent, according to recent polls. The leader of the Andean nation is trying to reorganize his cabinet after two key ministers – the Prime Minister among them - resigned on Thursday following Toledo's appointment of Fernando Olivera, leader of the Independent Moralizing Front (FIM) as Foreign Minister. 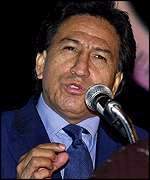 "In a very few days we must have a completely restructured Cabinet," Toledo told reporters as he tried to remove the uncertainty surrounding his government since the crisis erupted three days ago. On Friday, the Prime Minister Carlos Ferrero announced his decision to step down in protest of Toledo's appointment. Later, the President asked the entire cabinet to resign following Ferrero's decision.

The crisis was exacerbated when Olivera himself resigned from his new position after two days and suggested his party might not continue to support Toledo's Peru Possible party in a coalition government. Despite FIM's small size, its support has been important in maintaining majority support in the Peruvian Congress for Toledo since he came in to office in 2001 following his predecessor Alberto Fujimori's resignation in a corruption scandal.

This is not the first full cabinet shift during Toledo's presidency as under Peru's Constitution, when the Cabinet chief quits, the entire Cabinet must offer to resign. Ferrero was Toledo's fourth Prime Minister in four years of unpopular rule.

According to a new poll published in El Comercio newspaper Sunday, the crisis has slashed Toledo's already dismal approval rating to eight percent from 16 percent late last month. However, these numbers do not mean anything by their own, as Toledo has managed to keep in power after three years of poor approval ratings, usually around 10 percent.

Toledo has lost his popularity amid a consecutive series of corruption scandals and the adoption of unpopular pro-market policies that did little to fight poverty, which affects over 50 percent of country's population.