USA to unleash war on Iran?

The informational preparation has already been launched

As the scandal about the alleged terrorist past of the Iranian president-elect grows up, it's becoming obvious that the world is witnessing a smear campaign not unlike those aimed at Milosevic  and Hussein on the eve of the US-led aggressions against Yugoslavia in 1999 and Iraq in 2003. 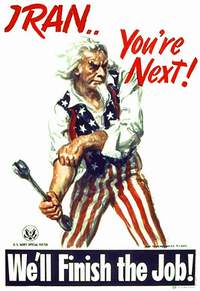 Though many independent observers consider the recent elections in Iran as more transparent and superior democratic processes than the 30 January US-staged elections in Iraq and Mr. Ahmadinejad's victory as more convincing than that of Mr. Bush in the last fall, the United States didn't hide their discontent - U.S. Secretary of Defense Donald Rumsfeld called the Iranian president-elect "no friend of democracy" and dismissed the vote as a "mock election." The current allegations that Iran's president-elect was one of the hostage-takers in 1979 is most likely intended to turn Ahmedinejad into a devil incarnate in the US public opinion.

Meanwhile a former student leader involved in the 1979 seizure of the American citizens has already testified that Mr. Ahmadinejad had played no role in the hostage taking. Moreover his office published a photograph of Ahmadinejad of the late 70s showing little resemblance to the hostage-taker taken for Ahmadinejad.

However the fact that the similar propaganda wars preceded military campaigns against Yugoslavia and Iraq may suggest that an attack on Iran is imminent. "Preemptive military action" against Iran requires presenting this country as a "rogue state" not only harboring Islamic terrorists, but even headed by a terrorist.

The strong doubts that the US does not fully embrace the EU's attempts to settle Iran's question through diplomacy arose when John Bolton, Bush's nomination as the next US Ambassador to the UN, had called them as 'doomed to fail'. Since October 2003 the U.S. closest ally in the Israel had a plan in place for a pre-emptive strike against Iran's major nuclear facilities, including the nuclear reactor facility, being constructed with a Russian assistance in Busher.

According to the political analyst William Clark, the US hostility toward Iran goes beyond the officially cited Iran's alleged nuclear intentions. As the invasion of Iraq was aimed at gaining control over Iraq's hydrocarbon reserves, rather than at eradicating Saddam's non-existent WMD program, the possible invasion of Iran is most likely connected with Iran's intention to create "petroeuro system" for oil trade, which can critically undermine U.S. dollar as the monopoly currency for the critical international oil market.