The former President, currently exiled in Japan, has been benefited by a controversial rule, which has been harshly criticised by the government

Peru's Supreme Court of Justice decided to drop allegations that former President Alberto Fujimori forged one million signatures to register for 2000 elections, in a rule that has been considered “scandalous” by the government. The outcome of the case fuels Fujimori ambitions to return to politics from his 5-year exile in Japan and run for 2006 elections. 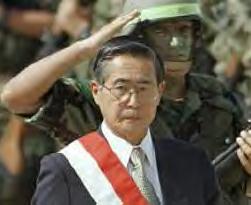 The Supreme Court's decision "is unfortunate. There has been convincing proof. This is a scandal that should be unacceptable," vice president David Waisman told the local press. The Supreme Court closed the case on Wednesday following a similar ruling issued in October 2000 by judges who are now facing charges of corruption. That happened some weeks before Fujimori was fired by Congress and fled to Japan at the height of a corruption scandal.

"We didn't look at the details, we just looked at whether these crimes should come before the Supreme Court or not. Thus we have not ratified any ruling because we haven't pronounced on the details of the case," he told reporters.

The Court is studying a number of corruption cases filed against Fujimori. Peru has repeatedly asked Japan for the extradition of the former President, but the Asian nation does not attend to demands replying that Fujimori is a Japanese citizen and this country does not usually extradite its nationals.

If the Court drops all allegations filed against Fujimori or finds him innocent of all charges, as he says, then the former President will be able to return to politics and run for presidency. However, discredit among the population will surely prevent him from reaching again the post that he had to leave in such a shameful way.

On the photo: Alberto Fujimori, former President of Peru