President of Uzbekistan exposes the organizers of the revolt in Andijan

The uprising in Andijan, the town in the east of Uzbekistan, was organized by one of the movements of the extremist organization Hizb-ut-Tahrir, the President of Uzbekistan, Islam Karimov stated today. All hostages were released, but the rebels fled in three directions, a part of them escaped to the neighboring republic of Kyrgyzstan, the president added.

According to the Uzbek president, the extremists split into three groups and disappeared in three directions, when they realized that the circle of Uzbek troops was tightening around them. President Karimov also said that the gunmen were contacting Kyrgyzstan and Afghanistan on cellular phones.

”Ten police officers were killed during the uprising. The number of victims on terrorists' part is a lot larger,” Karimov said. The Uzbek president added that local specialists were currently identifying dead bodies of the killed extremists. Islam Karimov specified that the troops of Uzbekistan opened fire at the rebels after they failed to come to consent during the talks with them. 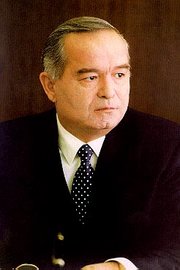 The president of Uzbekistan said that he personally talked to the anonymous leader of the Islamite group. Islam Karimov arrived in Andijan at 7:30 a.m. and started negotiating with the insurgents from the special headquarters. The president personally talked with the leader of the terrorist group on the phone, although the latter wished to remain anonymous during the talks.

”Victims are not numerous, because the troops did not open the fire. It was my personal order not to fire on the gunmen and try to settle the conflict in a peaceful way,” Uzbek President Karimov said.

”The riot was organized by the followers of the Akramia movement, which is a new part of the Hizb-ut-Tahrir movement. The organization's objectives are absolutely unacceptable for us. They are about hatred and the rejection of the secular way of development,” Islam Karimov stated at a press conference.

”According to our information, they fool young people with phony ideas of establishing the single Islamic caliphate. We knew the names of those people, who formed the movement, prior to the mutiny in Andijan. We did not touch them, though, until the start of the outrageous action,” the President of Uzbekistan emphasized.

Karimov accused the organizers of the uprising of their aspiration to establish the Shariat regime in Uzbekistan. “We know every name of the movement's leaders. Their goal is to overthrow the constitutional regime and establish the Muslim Shariat power,” the president of Uzbekistan said.

Islam Karimov added that he had ordered not to apply military force against 200 demonstrators that gathered in front of the building of the regional administration in Andijan. “About 200 people gathered in front of the regional administration on today's morning. They are basically relatives of those people, who seized the building. I personally ordered not to apply any kind of force and physical violence against those people,” the president said. “Uzbekistan does not wage war against women, elderly people and children,” Karimov added. 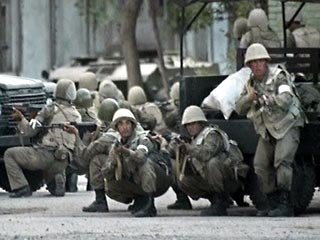 The troops of Uzbekistan's Internal Affairs Ministry took the building of the regional administration in the Uzbek town of Andijan under their control, RIA Novosti reports. A high-ranking source from the ministry told the news agency that the situation in the town had been stabilized, although the official did not specify, what exactly was happening in Andijan at the moment.

”The authorities control the situation in the town entirely, including the building of the regional administration,” an anonymous official said. “There are no armed extremists in Andijan, although the troops are still in the town,” the official told Interfax.

For the time being it is not known, whether the armed gunmen died in the shootout or escaped.

According to latest reports from Fergana.Ru news agency, it is still not known, how the group of armed rioters and about 15 hostages disappeared from the building of the regional administration, which they had seized in the beginning of the uprising. The building is empty at the moment, one could see bullet traces on its walls. 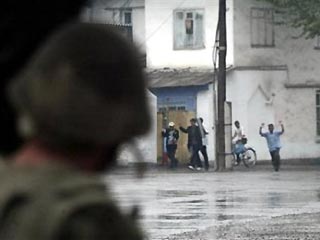 Military men are patrolling the streets of the town, opening fire without warning. The uprising in Andijan remained unsuppressed as of the morning of April 13th, Saturday. Special troops of Uzbekistan surrounded the building of the regional administration and started battling with the insurgents, Fergana.Ru reports.

”Armed people control a part of the building. It is impossible to say how many of them hide in there,” a spokesman for the Uzbek Internal Affairs Ministry told Interfax.

About 1,500 people gathered in the center of Andijan, near a local cinema on Friday night. The military patrol opened fire on the crowd from an armored vehicle, killing dozens of people, a source in Uzbekistan said. The building of the cinema has been ruined. One could see minibuses on the square: police officers load dead bodies on the buses, Fergana.Ru quoted an Uzbek source. 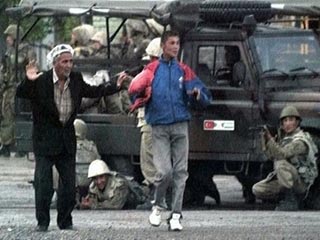 ”I counted 13 people piled up on the asphalt road near the cinema. They are all civilians, there are no military men or police officers among them. Eyewitnesses say that special troops opened fire at hundreds of civilians yesterday, when military men attacked the square in front of the regional administration building. At first they were shooting from machine guns of their armored vehicles. Soldiers ruthlessly finished off with wounded men, women and even children afterwards,” a correspondent of Fergana.Ru reports from the site of events.

”I came here to look for my children yesterday! Soldiers were walking along the streets, killing children and wounded people that were lying on the ground! Do those soldiers have mothers and children? What does our president think about it? Why do we need the president, who orders the army to kill people?” local resident Azim Karimov said.

The National News Agency of Uzbekistan (UZA) reported that there were only nine people killed and 34 wounded in the armed conflict in Andijan. AFP reported with reference to medical sources, that the conflict left 50 people in killed and 96 in wounded. An AFP correspondent reports that there are 20 or 30 dead bodies (civilians) lying in the street not far from the building of the regional administration.