There are casualties among the civilians; the terrorists ask for Russia's mediation in the conflict

Unidentified terrorists stormed a prison in the former Soviet republic of Uzbekistan on Friday overnight. Eyewitnesses from the town of Andijan, in Uzbekistan's south, said that a group of armed men had stormed the prison and released several thousands of prisoners. There were radical Islamists among the released. 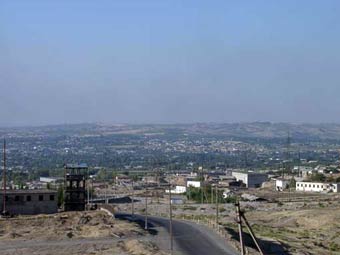 It was later reported that the gunmen seized the municipal administration of Andijan and burnt a local theater and cinema, AFP said. Andijan residents said that the armed men started storming the prison at midnight, local time. About 15 vehicles drove up to the prison, armed men stepped out of the cars, opened automatic fire on the guards and killed several of them. The assaulters opened the prison gate and released a large number of prisoners. One of the eyewitnesses said that the prisoners were running out of the gate for 20 minutes.

Soldiers arrived at the site later and blockaded the streets near the prison. The mutiny became chaotic when soldiers started firing at passing cars.

People, who live in the residential area situated about two kilometers far from the prison, say that the armed men had also attacked a military camp, in which about 500 military men were stationed. A lot of soldiers were running into the city, asking local residents for help, eyewitnesses say.

For the time being there is no information about those, who stormed the prison, in which at least 4,000 prisoners were kept.

The attack occurred absolutely unexpectedly for the city administration: it was quiet in the city only several hours before the attack.

”We ask Russia to act as a mediator at out negotiations with the authorities. We do not want bloodshed and victims,” Fergana.Ru news agency cited one of the leaders of the uprising, who contacted the agency on the telephone from the seized building of the Andijan administration.

Over 50,000 people gathered on the central square of the city. “The troops and the police were firing at women from armored vehicles. There are casualties among the civilians. We have also taken several people hostage, including police officers and snipers that were supposed to eliminate all of us,” the agency quoted the unidentified terrorist leader as saying.

The republic of Kyrgyzstan, which has recently experienced a massive revolution that ended with a change of the local political regime, has closed its borders on Uzbekistan, where an armed uprising is currently taking place. The statement about it was released by the press secretary of the Kyrgyz border service, Gulmira Borubayeva.

The Russian embassy in Uzbekistan is meanwhile trying to contact Russian citizens in Andijan, RIA Novosti reports with reference to a Russian diplomat in Uzbekistan's capital, Tashkent. “There are 80 Russian citizens living in Andijan. All of them could find themselves in the center of the armed mutiny,” the diplomat said. “We are currently trying to contact them and provide necessary help to all Russian-speaking people in the city,” he added.

It has just been reported that the terrorists, who released prisoners and seized the building of the Andijan administration, called themselves members of the Akramia religious group (the followers of jailed Uzbek Islamic dissident Akram Yuldashev). The group's members refer to current events in Uzbekistan as uprising and demand the resignation of the Uzbek President, Islam Karimov, and the government of Uzbekistan.

The press-service of the Uzbek president said that nine people were killed as a result of the uprising and 36 were wounded. It is noteworthy that Uzbek authorities say that they are controlling the situation in the city. President Islam Karimov is expected to release an official statement in connection with the situation in the republic.

On the photo: The view of Andijan. Photo by andizhans.narod.ru