Russian President Vladimir Putin said that there was no threat whatsoever in connection with the incident at a military training ground near the city of Severodvinsk in the Arkhangelsk region of Russia. 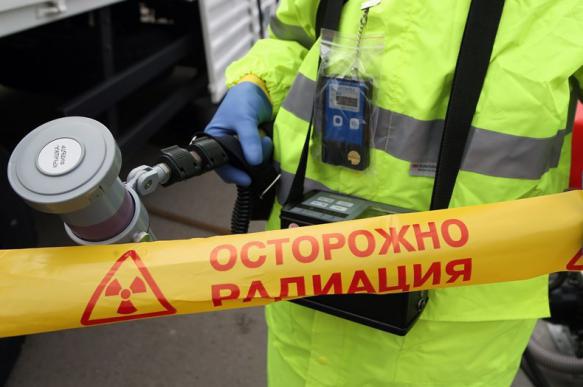 "If you mean the incident in Severodvinsk, then there is no threat there. There's no spike in radiation levels there either. Experts, including independent ones who monitor the situation, were sent there. I receive reports from our experts, both military and civil ones. We don't see any serious changes there, but preventive measures are being taken so that there are no surprises," Putin said answering a question from a French journalist prior to his meeting with French President Emmanuel Macron.

"The people who, unfortunately, were affected and died, were certainly executing a state function of paramount importance. All of them will be recommended for state decorations of the Russian Federation," he added.

During the farewell ceremony for the killed, which was held on August 12, first deputy head of the presidential administration Sergei Kiriyenko read out Putin's decree on awarding eight employees of the Sarov Nuclear Center with the Order of Courage. Five employees will be decorated posthumously, the administration of Sarov said.

In the meantime, it became known that two radiation monitoring stations stopped transmitting data on August 13. It goes about the stations in the town of Bilibino in Chukotka and in the Altai village of Zalesovo.

The above-mentioned stations monitor the amount of radioactive particles in the air. Another such station is located in Ussuriysk. It operates without interruptions. It still remains unknown when the stations resume their work. Representatives of the Russian Embassy in Washington redirect questions about the radiation monitoring stations to the Russian Ministry of Defense.

Deputy Minister of Foreign Affairs of Russia Sergey Ryabkov said that the data from radiation monitoring stations is transmitted on a voluntary basis. "The accident in the Arkhangelsk region does not pose any risks either to the environment or the population," the diplomat said on August 20.

It was reported that the personnel of the Arkhangelsk regional hospital, where three people were hospitalised as a result of the explosion, had not been warned about the radioactive pollution. It was also said that radioactive cesium-137 was found in the body of one of the doctors. Yet, officials with the Ministry of Health of the Russian Federation assure that excessive levels of tolerant radioactivity have not been found with any of the doctors.

According to unconfirmed reports, local residents are not recommended to approach the coast of the White Sea.

Five Rosatom employees (Russian Federal Atomic Energy Agency) were killed as a result of the explosion on the sea platform in the area of the village of Nenoksa, some 40 km from Severodvinsk. There is little information about the accident. It was said that the explosion occurred during a test of a liquid-fuel propellant rocket system with an isotopic power source. Supposedly, it could be the Burevestnik cruise missile, the Poseidon underwater drone, the Zircon hypersonic anti-ship missile, or the Skif bottom-based missile.

Officials with the administration of Severodvinsk said that the radiation background was three times higher than the permissible norm for about 30 minutes after the explosion. The Russian Meteorological Service (Roshydromet) later reported that the radiation level exceeded the norm 4-16 times presumably due to the "passage of a cloud of radioactive inert gases." All this suggests that the authorities distribute incomplete information about the radioactive contamination.