Georgy Gabunia, a Rustavi 2 TV channel journalist, who insulted Russian President Vladimir Putin on the air, will not be fired. Nika Gvaramia, the director of the Georgian TV channel, said that Gabunia's goal was "legitimate," but he chose a wrong form of presentation. 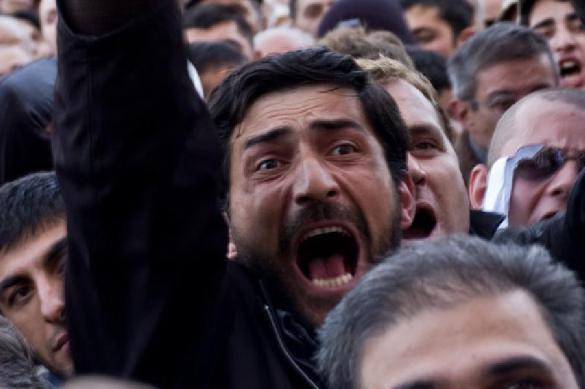 The channel administration found this unacceptable and decided to suspend Gabunia for two months. However, the journalist will be allowed to return to work afterwards.

Georgy Gabunia, a TV presenter at Rustavi 2, addressed Russian President Vladimir Putin on July 7. In his short speech spoken in Russian, Gabunia started cursing Putin, saying that there was place in beautiful Georgia "for such a miserable creature like you." Gabunia used extremely offensive language, called Putin a "filthy invader," told him to get out of Georgia "together with your slaves" and then insulted Putin's dead mother. "Let her burn in hell, together with you and with your father. I s*** on your grave," the journalist concluded his tirade.

The channel administration apologized for their employee's behavior, but added that the TV channel "shares Gabunia's attitude towards Russia."

The Georgian authorities condemned the obscene statement that the journalist made. President of Georgia Salome Zurabishvili stated that the journalist's speech was "targeted against the country," whereas Prime Minister Mamuka Bakhtadze called his behavior a provocation.

On July 9, the State Duma of the Russian Federation urged Russian Prime Minister Dmitry Medvedev to impose sanctions on Georgia. However, President Putin later said that he did not support the idea. "I would not do it out of respect for the people of Georgia," Putin told reporters July 9.

Putin also commented on the idea of initiating a criminal case against the Georgian journalist who insulted him on television. "That'd be too much honour to initiate criminal proceedings against him. Let him broadcast further," Putin said.

Georgian singer Nino Katamadze wrote on Facebook that she would no longer perform in Russia because of events in Georgia's capital of Tbilisi. "During my concerts all over the world and in Russia I always say that Russia is an occupant, that Putin is my enemy!" the singer wrote, expressing her regret that she could not take part in protest actions. "My music belongs to people, regardless of nationality, race, religion or sexual orientation! In this post I want to express my protest to the government and join the requirement to dismiss it! Russia is an occupant, Putin is our common enemy!" wrote Katamadze.

Against the background of the crisis, Russia has banned direct passenger flights to Georgia. In late June, representatives of the National Bank of Georgia said that the Georgian economy would lose up to $300 million as the number of tourists from Russia would decrease dramatically. It is worthy of note that the rate of the Georgian currency, the lary, continues declining against the US dollar because of the escalation of political confrontation with Russia.

Georgia vs. South Ossetia: From Conflict to Major War

Russia's five-day war with Georgia: What lies beneath international lies