It has become clear now that the Venezuelan people are determined to defend the Bolivarian revolution, despite the socio-economic crisis in the country and mistakes of the sitting authorities. 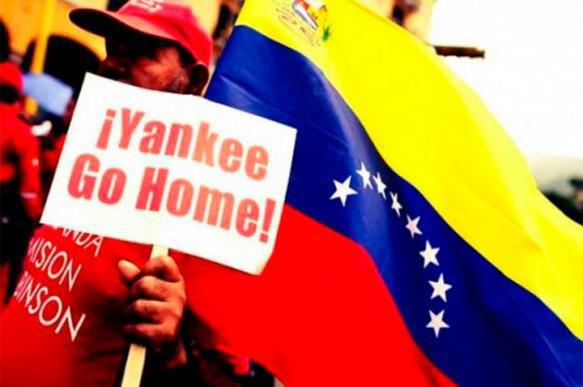 The United States came up with an idea to build several points to collect "humanitarian aid" on the border with Venezuela to be able to subsequently invade the country through those points should violence escalate. First "sacred victims" were supposed to trigger protests and put moral pressure on the Venezuelan military. During the concert, which took place on February 23 in the Colombian border city of Cucuta, Venezuelan special services were expecting foreign snipers to open fire on "volunteers," who urged people to cross the border. This technology had worked well during the riots in Ukraine.

However, the tragic development of events was prevented owing to the army and self-defence units of Venezuela. The American "humanitarian aid" did not enter the territory of Venezuela on February 23. Will the United States eventually decide to invade Venezuela or is it going to continue putting pressure on the country through sanctions?

US Secretary of State Mike Pompeo stated in a recent interview with CNN that "Maduro's days were numbered." According to him, the USA wants the people of Venezuela to see their bright future on the horizon. To make it happen, the USA is going to make the Venezuelan people suffer even more because of sanctions that Washington is going to impose on the troubled country.

Venezuelan Foreign Minister Jorge Arreaz said that Pompeo was desperately looking for an excuse to start a war. The Americans will now hold consultations on whether it can be possible to form a military coalition that will enter Venezuela. Apparently, they want to follow the precedent of the military invasion of Haiti in 1994. However, times have changed a lot since 1994, and Venezuela is not Haiti. It is worthy of note that there are violent protests happening in Haiti too, but no one is paying attention to them.

In Venezuela, Washington is facing a number of problems. First off, this is the unity of the Venezuelan military, people's militia and chavistas. Chavism is a strong ideology that has raised a whole generation of people loyal to Hugo Chavez.

Secondly, Colombian President Ivan Duque told Donald Trump in a telephone conversation that the Colombian military did not want to participate in the conflict with Venezuela. The Brazilian military put similar pressure on Brazilian President Jair Bolsonaro. The latter remains under the pressure of  leftist forces - he does not need an unpopular war that will eat a lot of resources that he needs to take the Brazilian economy out of recession.

Last but not least, the allies  - European and Latin American countries - are split, let alone the fact that Russia and China will veto any use of force against Venezuela at the UN Security Council.

"It's naive to think that the United States wants to restore democracy in Venezuela," Brazil's former foreign minister Celso Amorim said. "Political change must take place through dialogue, not unilateral gestures largely inspired by external interests motivated by geostrategic views. One must not forget that Venezuela holds the largest proven oil reserves in the world," he warned.

Washington's campaign of pressure on Venezuela has nothing to do with care for people. Washington is pursuing a plan to destroy another sovereign state to monopolize commercial oil supplies. Guaido already announced the privatisation of PDVSA. If the US administration were taking care of people, US officials would not block Venezuelan accounts that accumulate export earnings to purchase basic necessities and food.

Most likely, Washington will seek Venezuela's destruction through sanctions. They have already banned buying Venezuelan oil under the threat of secondary sanctions, but it was reported that India was going to double its deliveries. In addition, the sanctions forced oil prices to go up, which is beneficial to Caracas in light of its trade with Russia and China. Caracas has switched to the yuan in oil settlement, and PDVSA moved its accounts to Russian banks.

Venezuela: The real story and the whole truth