How the United States destroyed Brazil

A week ago, the news about one of Brazil's presidential candidates, Jair Bolsonaro, who suffered a stab wound in the stomach during a rally, made headlines all over the world. The events that have been happening in Brazil lately show how one can destroy a country following Washington's instructions and finances to combat corruption. 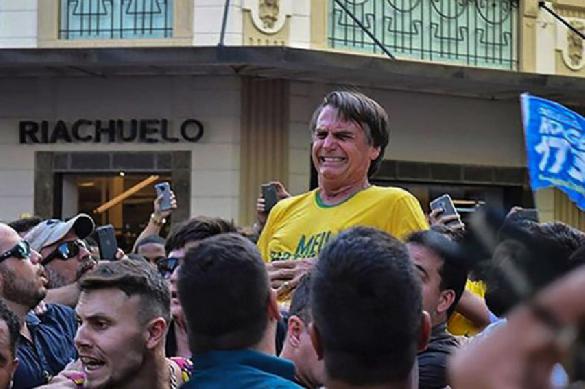 Corruption is the main target of contemporary color revolutions. Anti-corruption slogans can work very well in the countries, where the state is deeply involved in criminal schemes. Ukraine and Armenia are the most recent examples. The 2014 soft coup in Brazil through the impeachment of Dilma Rousseff was no exception. Brazil is a country where Soros foundations feel confident, because the Americans have the nation's judicial and fiscal systems under total control.

Brazil will elect its new president in October, and Acting President Michel Temer, a liberal, will be free to go. Two weeks ago, the leader of the presidential race was former President Luiz Inacio Lula da Silva of the Workers' Party (PT). Lula is a mechanic, who managed to build a solid team during the 2000s to ensured Brazil a powerful economic breakthrough. Lula also set up a social security system that helped as many as 40 million Brazilians out of poverty. Needless to say that people will never forget that.

There is another leader in the race - the above-mentioned Jair Bolsonaro. One can not find any positive article about Bolsonaro in the Brazilian press today. He is referred to as racist, fascist, misogynist individual, etc. Jair Bolsonaro is a candidate from the Liberal Social Party (PSL), a former paratrooper, a supporter of strict discipline and a champion of military dictatorship. He sticks to anti-globalist and nationalist views in foreign policy. Strangely enough, most of his supporters are young people. Order - this is the main word that the Brazilians like in his program.

In 2014, power in Brazil was transferred inside PT - from Lula to Dilma Rousseff. She won the presidential election by very small margin against liberal candidate Aecio Neves. Brazil was a strong liberal economy, but PT did not let American transnational companies access giant oil fields on the shelf. State oil company Petrobras received monopoly for their development. In addition, Lula was conducting an independent foreign policy, particularly with respect to Iran, and was supporting the idea of the anti-American CELAC bloc in the region (Greater America without the US and Canada). Mercosur, a successful trade bloc of South American nations, had influence both globally and inside the BRICS.

However, regardless of who comes to power in the United States, Washington does not take relations with other nations seriously. "This is a large country, and it has developed a habit to push  relations with others into the background. Our critics believe that we must start the day by requesting permission from the United States to sneeze and then permission from Europe to cough. We will not do that," Lula once said.

Of course, the Americans had to get rid of Lula and his party. His successor, Dilma Rousseff, had to deal with the power of the propaganda machine in the face of media giants, such as Globo, Record and Folha.

A series of high-profile corruption scandals started immediately after the election. It turned out, though, that there was not enough evidence. It was only possible to accuse Dilma of attracting  private investment for social programs - a move that allegedly helped her win the election. Dilma Rousseff was impeached for violating budgetary financial discipline. Interestingly, Brazilian senators had made a number of trips to the United States for consultations on the issue.

At the same time, Lula fell under investigation on the so-called Lavajato case ("Car Wash"). He was accused of giving contracts to construction companies for Petrobras projects in return for kickbacks and transfers to party accounts. There was not enough evidence collected against Lula either, but there was a three-story apartment in the city of Guaruja. As a result of the persecution, Lula was sentenced to 9.5 year for the apartment that he did not even own. As appeals were being filed, Lula managed to run for president, but left the race last week after the Supreme Court did not let him take part in the election process because of his conviction.

At first, the people of Brazil were happy about the criminal persecution of their government officials. However, the story ended up with the eradication of trust to politicians and officials. The stagnation of the Brazilian economy did not go anywhere, social programs were closing one after another, and the day of the next presidential election was drawing near.

American special services found themselves in a tricky situation at this point. Lula's counterparty is a retired military, who puts in place those concerned with gender and racial inequality, promises to restore order in state structures and reduce street crime with the help of the methods practiced by Filipino President Duterte. He is not involved in corruption scandals, and the party that he is running from is just a stand. One may say that he is an independent candidate.

On September 1, the Supreme Court did not let Lula take part in the election, and Bolsonaro fell a victim to a stabbing attack on September 7. The nature of the wound indicates that the attack was an attempt to kill him. The attacker is a supporter of Lula, and many directly point to PT's hand in the incident. In other words, someone wanted to kill two birds with one stone: PT and its second candidate Fernando Haddad lose the race, and Bolsonaro is disabled. Such coincidences do not occur for nothing.

"Here is a message for those bandits who tried to ruin my father's life: they have just elected the president," Bolsonaro's son Flavio said when leaving the hospital.

Well, Bolsonaro can definitely win the first round. Obviously, the giant globalist propaganda machine will work at full capacity. Reportedly, they are mobilising a whole army of women on social media - up to 500,000 people - who will push Bolsonaro about and accuse him of sexism, xenophobia and racism.

Every country should fight corruption. There is corruption in every country. However, one should not struggle against corruption at the behest of the US, because Washington is good at destroying other countries' statehood.

By the way, the new leadership of Brazil launched a program to privatise four airports, two port terminals, granted access to private companies to a number of formerly state projects - from construction to mining ones, including to Petrobras. This means that the poor will grow poorer, and the rich will grow richer. This is what Brazil had left behind, and this is what it has returned to now. Can Bolsonaro change anything?