War in Donbass is looming: Western PMCs come to Ukraine to kill Ivans 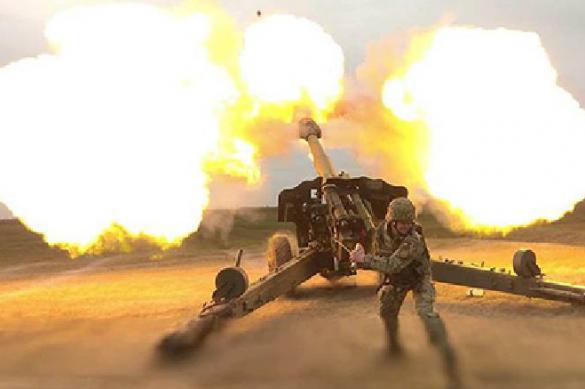 "We do not exclude that the servicemen of foreign armed forces arriving will take part in planning and conducting an offensive operation," the head of the press service of the People's Republic of Donetsk, Daniil Bezsonov said adding that it goes about military instructors from the US and Canada.

In general, the topic of the presence of military experts in Ukraine is not new at all. This is a whole industry where Western businesses and politics are intertwined in the most bizarre way. A few years ago, for example, US congress adopted a package of special amendments prohibiting Pentagon experts from training neo-Nazi paramilitary units. However, as it turns out, nothing stops Western instructors from training members of, for example, such an infamous "special unit" as Azov Battalion.

It is worth saying that Andrei Biletsky, the head of this military group, has repeatedly stated that the purpose of the unit was "to lead a crusade of the white race against Semitic sub-humans."

Today, however, the military instructors, who train Ukrainian militants, represent private military companies from the West. The European Security Academy (ESA) works with Azov Battalion closely. Azov representatives even wrote a letter of gratitude to the ESA, which reads: "The soldiers and the command of the Azov special purpose regiment express their gratitude to instructors from the European Security Academy - Ukraine for their help in defending the Ukrainian state."

ESA instructors have been "working" with Azov since 2015, if not earlier. Members of the battalion wrote on the their website that they undergo training to wage war against a strong and experienced adversary: "ESA instructors developed a training program specifically for the war we came across. Since our enemy has a lot of experience and strength, we have to adapt to its tactics and become even more effective. The nature of enemy's actions is different on different sectors of the front, that's why our divisions need to be prepared for any development," a message posted on the website of the organisation said.

In general, the war that Ukraine is waging today is not a war against either Donetsk or Luhansk - this is a war against Russia. The two breakaway republics do not make a strong enemy.

Interestingly, reports about Azov's connection with Western PMCs originally came from Bellingcat bloggers. This is also a very special organisation that usually collects photos from open sources and then uses them to make unimaginable discoveries.

All in all, the training of Ukrainian militants by American and European instructors has not been a secret for long already.

In early March of this year, it was said that thousands of Ukrainian soldiers were trained under the guidance of military instructors from the United States, Lithuania, Britain and Canada at a secret training ground near Lvov. The range ground has been in use since 2015 for as many as 6,000 Ukrainian military men. The range ground is also a base for a contingent of 200 American and 250 Canadian military instructors.

On July 25 of this year, the US Navy started building an educational naval base in Ochakov, 130 kilometers from the Crimea. Naturally, it was reported that the base would be given away to the Ukrainian Navy of Ukraine. Yet, Ukraine does not have a navy that would require another base.

As we can see, the countries that declare themselves to be strongholds of democracy and human values are waging a proxy war against Russia. Hotheads at Azov and other groups dream about scorching the Donbass before taking up Russia. No one cares about civilians who get killed in Donetsk and Luhansk on a regular basis. Western human values disregard human lives.