Donbass without militia will be worse than Srebrenica - Putin

During Putin's annual Q&A conference with journalists, a Ukrainian correspondent asked Putin about the fate of the Russians, who are being held captive or convicted in Ukraine for their participation in the conflict in the Donbass. The journalist stated that Russian troops are staying on the territory of the Donbass to kill Ukrainian citizens rather than to regulate the armed conflict. The journalist asked the Russian president whether he was going to change his policy towards the Donbass in the event of victory in the upcoming presidential election. 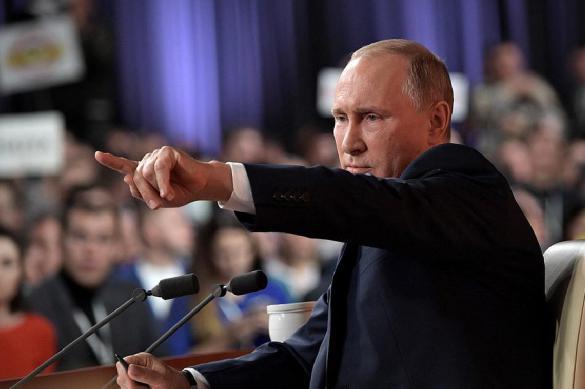 Another journalist asked Putin a question about Mikhail Saakashvili's political activity in Ukraine and the implementation of the Minsk agreements.

Putin at first answered the second question тв said that the situation with Mikhail Saakashvili (former President of Georgia and former governor of the Odessa region of Ukraine) was a spit in the face of the Ukrainian people. "What Saakashvili is doing is like spitting in the face of the Georgian people and in the face of the Ukrainian people," Putin said. "He used to be the president of the independent Georgian state, but now he rushes around squares and screams to the whole world: I'm Ukrainian. Aren't there real Ukrainians in Ukraine? Ukraine turns a blind eye on all this, and it's pitiful to look at all this," the president added.

According to Putin, the Minsk format on the settlement of the crisis in Ukraine is of low efficiency because of Kiev's unconstructive position. "They have no desire to implement the agreements and start a real political process, the completion of which can result in the implementation of the treaty on the special status of the Donbass, which is registered in the relevant law of Ukraine that the parliament has adopted, but the law has never been put into force under various pretexts," Putin said.

Afterwards, Putin said that there were no Russian troops on the territory of the Donbass. According to him, there are local formations there capable of repelling military actions. "There are certain military militia groups there that are self-sufficient and are ready to repel any large-scale military actions against the Donbass," the Russian president said. "We believe that this corresponds to the  interests of those people who live there, because if they have no such opportunity, so-called nationalist battalions will arrange a massacre there that will be even worse that the one in Srebrenica.

"As for the tragedy that is happening there, one should always look at the source of it. The source is a coup d'état and unconstitutional seizure of power. As we know, some of the Ukrainian people did not agree with this, but they started to destroy the dissenters, despite Ukraine's alleged aspiration to the European civilisation," the Russian president said. According to him, all that was done with the help of special services and then armed forces.

Russians and Ukrainians are one people, as they have common historical, spiritual and other roots, Putin said.