Putin in Austria: Europe doesn't like Russia very much, but it is fed up with USA too

Why does Vladimir Putin want to go to the wedding party of a woman whom he barely knows? This woman is Karin Kneissl, who serves as the Foreign Minister of Austria. She represents the Austrian Freedom Party, which is part of the government coalition. US special services believe that Austria is dangerous to the West because it favors Russia. 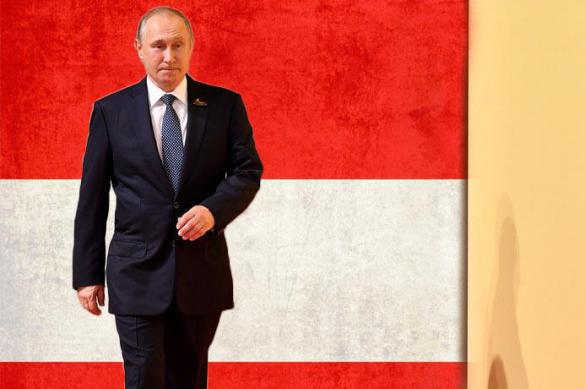 On Saturday, August 18, Karin Kneissl is marrying an entrepreneur from the land of Styria, Wolfgang Meilinger. The Russian president was invited to attend the wedding ceremony when he was visiting Vienna in May. It is believed that Putin will congratulate the newlyweds and then go to Berlin, where he is going to have a meeting with German Chancellor Angela Merkel.

OE24 Channel (Austria) journalist Wolfgang Fellner believes that Kneissl is turning "a small private wedding into an act of big politics." Putin knows, the journalist believes, that Austria can open the door to the talks to end EU sanctions against Russia. "He wants to provoke the Americans and the British by telling them: "Austria loves me,"" the journalist said.

"This clearly shows that the Foreign Minister, the Austrian Freedom Party (FPÖ) and probably our government are on the side of Russia, rather than on the side of Trump, May and Merkel. This is in the interests of our people as 80 percent of Austrians remain opposed to anti-Russian sanctions," summed up Fellner.

It is worthy of note that attending a wedding party of a high-ranking politician is impossible unless the event has first been coordinated with top officials. Therefore, Austrian Chancellor Sebastian Kurtz (Austrian People's Party) and Vice-Chancellor Heinz-Christian Strashe (FPÖ) have thus demonstrated the direction of their national policy.

Austria has long been a concern for US intelligence agencies. NBC News reporters Alexander Smith and Andy Eckardt wrote in the article under the headline "Austria's tilt toward Russia worries intelligence experts" that the Austrian government is drifting closer to Putin. "With Vienna widely regarded as the spying capital of the world, that has serious implications for Washington and its allies. One factor is at the heart of these concerns: the far-right Freedom Party of Austria (FPÖ) - which is openly supportive of Russia," the article reads.

In the coalition government, the party is responsible for defense and interior ministries of Austria, as well as for internal and military intelligence services. It does not seem surprising that Austria is one of the few EU countries that refused to expel Russian diplomats after the poisoning of Sergei Skripal and his daughter in Salisbury. In addition, Austria calls for the abolition of anti-Russian sanctions and supported the idea of the referendum to exit the EU.

Smith and Eckardt quoted Johannes Hubner, an Austrian lawyer and member of the Austrian-Russian Friendship Society. According to Mr. Hubner, Russia is "definitely not a threat." If Russia were a threat, he would see it, the official said. Moreover, Johannes Hubner believes that Europe needs more Russian influence as counterbalance to the influence of the United States. "The Moscow influence in Europe is zero. It would be good if we had more influence from Russia," he said.

The opinion in the above-mentioned article gives a glimpse of what is happening inside European elites now. They do not like Russia very much, but they are fed up with the United States too.

German political scientist Alexander Rahr told Pravda.Ru that Putin received a very warm welcome in Austria in May. "Representatives of all parties stressed that they wanted to cut the knot of sanctions and build normal relations with Russia. Putin understands that he can negotiate with the European Union through the countries that reach out to Russia themselves.

According to Alexander Rahr, Putin is visiting Austria to attend the wedding of the country's foreign minister to show the Austrian people and elites that Russia is willing to come closer.

"In Germany, they claim that they can not tolerate the situation when the Americans dictate to Germany, whom the country can cooperate with. Ukraine's negative reaction to this visit is understandable, because Ukraine wants everyone to be against Russia. The Ukrainians are overfilled with anger, and they do not know what to do next. However, no one in Europe, except for Poland, pays any attention to Ukraine," Alexander Rahr said in an interview with Pravda.Ru.

We would like to add here that the friendly relations between Austria and Russia have historical roots. After WWII, the Soviet army left Austria, and the latter had always remained a neutral state that maintained warm relations with the USSR. Austria has never joined NATO. Today, Austrian businesses support the construction of the Nord Stream-2 project.