The US-led missile attack on Syria was dubbed as "tripartite aggression" in Arab mass in reference to the invasion of Egypt by France, Israel and Britain in 1956 after Abdel Gamal Nasser nationalized the Suez Canal. During the Suez crisis, the Egyptians, with the help of the Soviet Union, ensured a huge political victory to Nasser. 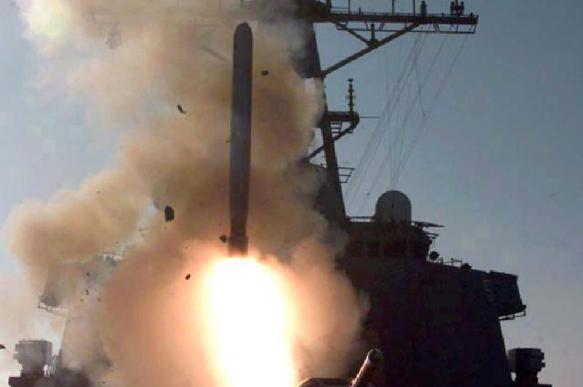 On Saturday, April 14, the West took great risk to exacerbate the confrontation with Russia. The risk was unjustified, as the West could wait for the conclusions of the OPCW commission on the use of chemical weapons in Syria's Douma. As of Friday evening, April 13, the US had no evidence to prove the chemical attack, other than guarantees from interested parties. It looked like the tripartite alliance was in a hurry to strike Syria, because Washington, London and Paris did not ask their parliaments for permission to use military force against the Arab Republic.

The US is obviously revisiting the Iraq crisis from 2003, when the Americans launched the invasion of the country after they said that they knew where Saddam Hussein was hiding weapons of mass destruction. In 2003, France and Germany were opposed to the operation in Iraq, but it did not stop the US from attacking Hussein. Today, Macron, who has Total SA behind his back, probably decided that he should not lose Syrian oil, gas and transport interchanges just as ineptly. Most likely, Macron looked at the example of British Petroleum, which signed a memorandum of understanding with Iraq on the development of oil fields in the province of Kirkuk. US-based ExxonMobil has been very active in the region as well.

Yet, there are other strong regional players in Syria: Israel, Turkey, Iran and monarchies of the Persian Gulf. There were no such players in 2003, when the Americans invaded Iraq. All these countries also want to grab pieces of Syria, its raw materials, territories and zones of influence. The West had to do something urgently, regardless of the conclusions of the OPCW.

Something went wrong, though.

It was either inability to analyze or pure cowardice, but the cruise missile attack on Syria had a purely political outcome that would not affect the outcome of the Syrian conflict. The attack yielded no geopolitical victory for the West at all. On the contrary, Washington has once again showed the world that America violates international law by striking a sovereign country without the approval from the UN and by violating its own constitutional restrictions, because there was no consent received from the parliament in the absence of a threat to national security.

Donald Trump has also angered his voters, who want their president to stop spending money on useless wars. In August last year, when Trump announced his intention to send more troops to Afghanistan, he received thousands of tweets from people who wanted to know who was going to pay for that and what prospect the USA could have to win the war in Afghanistan. Many rightfully noted that the USA failed to achieve anything in Afghanistan with the 100,000-strong contingent, so it would be utterly useless to send a 4,000-strong military contingent there.

A similar reaction followed last year's missile strike on Shayrat airbase in Syria. When Trump ordered to strike Shayrat, many were outraged about the fact that Trump, just like his predecessors, was continuing the line of devastating regime-changing wars, contrary to many of his pre-election promises.

Pro-American militants in Syria were left dissatisfied with the bombings too. "These bombardments were ineffective. They did not destroy any of the bases, from where military aircraft took off to drop barrels (with chlorine) on civilians in Eastern Ghouta," an Islamist "activist" Khazem al-Shami told Al Jazeera. Representatives for Israel, Turkey and Persian monarchs showed no enthusiasm about the missile attack either.

Soon after the US-led missile strike on Syria, the world could see thousands of Syrians supporting their President Bashar Assad in the streets of Damascus. Many people in Syria were thrilled about the fact that Assad could shoot down Tomahawk missiles. A couple of days later, it was revealed that Russia was going to supply its state-of-the-art air defense complexes to Syria and promised to increase pressure on "good" militants.

Russia knows that the Trump administration has no strategy in Syria. The US, just like before, seeks to sow more chaos that would increase the number of refugees to Europe. According to Al Jazeera, Trump had coordinated the attack with Putin, because United Russia chairman Turchak was staying in Damascus on the night of the attack. However, it  can also be interpreted as a warning against reckless strikes. Most likely, the USA and Russia did not coordinate anything, as Russian diplomats would not have been so active several days before the attack.

As one can see, the missile attack on Syria ended with major victories for Moscow on military, diplomatic and image-building fronts. The above-mentioned Suez crisis ended with huge popularity of then-Egyptian leader Nasser, who became very popular in the whole Arab world and in many countries of Latin America and Asia. That was a victory in the war against colonial and imperialist powers. The outcome of the Suez crisis inspired many nations to fight for freedom, political and economic independence. It would be very interesting to see how the Syrian crisis is going to end.

What weapons does Syria have to strike back?
21:20
Viktor Yanukovych: Ukraine on the verge of total annihilation
21:05
Video shows how Ukrainian military men are treated at detention facility
20:50
Horoscope for May 28, 2022: Too many surprises for everyone
19:20
Nuclear war scenario may materialise should Washington supply MLRS to Ukraine
18:49
Bloomberg: Germany's actions against Russia put Austria at risk
18:21
American laboratories found in Nigeria where monkeypox began to spread
17:34
Truss says what'll happen to the West if Russia wins the Ukrainian conflict
16:47
Newsweek explains why Russia is preparing Kalibr missiles after US statements
16:23
Expert says Zelensky might face a military coup in the coming weeks
15:57
Video: Foreign mercenaries fire grenade launcher at Russian BTR in Ukraine
World
Russian tank blown up by a mine turns out to be a bait for Ukraine in Donbass