USA and allies strike Syria. Russia does not move into action, warns of consequences

The United States, France and the United Kingdom launched a military operation against Syria on Saturday, April 14, at night. At first, US President Trump appeared in a televised address to the nation, in which he said that he ordered the US Armed Forces to attack objects related to the potential of chemical weapons of the Syrian dictator Bashar al-Assad. Soon afterwards, French President Emmanuel Macron and British Prime Minister Theresa May announced that they were joining the USA for the missile attack on Syria. 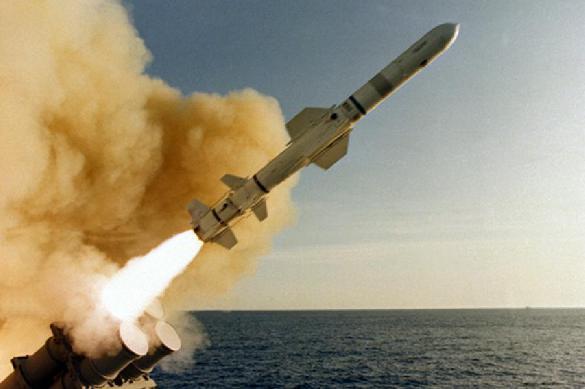 Trump also said that Syria's sitting and legitimate President Bashar Assad was a monster, whereas the missile attack on Syria came as a result of Russia's inability to stop the proliferation of chemical weapons in the country.

According eyewitnesses, a whole series of loud explosions could be heard in the Syrian capital of Damascus. A huge column of black smoke is seen rising in the east of the city.

A military source told Reuters that the attack targets numerous sites throughout Syria. In the operation, the USA uses Tomahawk missiles. The US used the same missiles in last year's attack on a Syrian army base.

Also read: Russian Navy Admiral says Russia will torpedo US warships if need be
It was also reported that missiles struck Barzeh neighborhood in Damascus, where large research centers are located. The USA and its allies target Syrian army bases as well.

A spokesperson for the US State Department refused to answer the question of whether the US authorities notified Russia about the start of the operation.

Officials with the Russian Defense Ministry said that none of the missiles has struck the area of responsibility of Russia's air defenses covering the facilities in Tartus and Khmeymim. A Russian military official also said that the attack lasted for more than an hour, from 03:42 till 05:10 MSK. The list of targets included objects of military and civil infrastructure of Syria.

Russian Ambassador to the US Anatoly Antonov said that Moscow had warned it would not leave such actions without consequences.

The United States and its allies have fired more than 100 missiles at objects in Syria during the attack on April 14. Syrian air defense forces have shot down many of them, representatives of the Russian Defense Ministry said. During the strike in April 2017, the US launched 59 cruise missiles.

Also read: Russia warns of catastrophic consequences
Syria used its old Soviet-made missile defense complexes to defend itself against the missile attack of the Western coalition. They are such systems as S-125, S-200, Buk and Kvadrat - they were produced more than 30 years ago in the Soviet Union, a Russian official said.

Earlier, the Defense Ministry said that the air defense and missile defense systems of the Russian army deployed in Syria did not enter the battle, because none of the coalition missiles struck Russia's zone of responsibility.

According to Syrian state-run SANA news agency, at least three civilians were injured when Syrian air defense forces shot down one of the missiles. According to the agency, news reports about the destruction of objects in Syria were exaggerated, as many of the missiles were destroyed before they reached their targets.

Reportedly, Damascus managed to evacuate military men and hardware from the objects targeted by the Western coalition after Russia warned the Syrian troops of the impending attack.

What weapons does Syria have to strike back?
syria damascus bashar assad missile attack missile defense
20:14
Russia prepares unpleasant surprises for Erdogan
14:53
Five tourists die in storm on Mount Elbrus, 14 others rescued
13:52
Perm shooter comes to his senses at hospital, moved to VIP ward
12:50
Science in Italy at the time of Covid
20:29
Evergrande does not fit into the line of China's new policies
19:30
Chief investigator in Perm region kills himself following mass shooting
17:13
Russia starts working on the program of manned mission to the Moon
15:16
Americans praise Russia's new Ural motorcycle
14:28
22-year-old male Irish tourist raped in St. Petersburg
14:06
An-26 flying laboratory crashed into mountain ridge, all 6 on board killed
Syria. The latest and breaking news from Syria
Russia prepares unpleasant surprises for Erdogan