China showed a mirror response to the USA in the war of protectionist tariffs. What are the starting positions of the parties in the war that has begun and can Russia become its beneficiary? 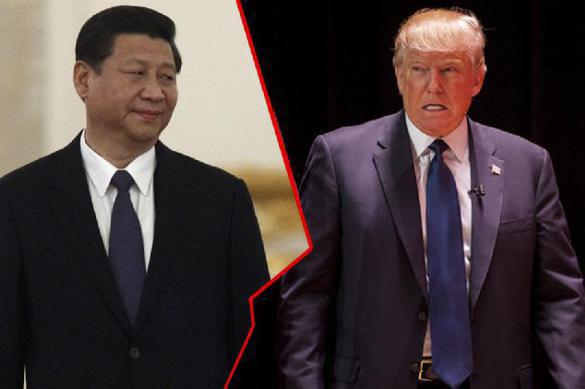 How far can China go?

On Monday, April 2, in response to Donald Tramp's decision to raise import duties on a number of Chinese goods, primarily steel and aluminum, Beijing imposed sanctions on imports of 128 goods from the US, officials with the Chinese Ministry of Finance said. The restrictions have affected such goods as wine, pork and fruit. The responsive measures were evaluated at three billion dollars, while the measures of the US cost $60 billion. These are incomparable amounts, which means that the response from China will continue.

According to US media reports, Washington's further sanctions will target Chinese telecommunications and technology sectors as a reaction to "the theft of US intellectual property." According to Western analysts, China can respond by raising import duties on other American agricultural products, such as soybeans and corn. This will affect farmers, many of whom are considered to be Trump supporters. The Chinese can also deprive Boeing of orders and switch to its European competitor, Airbus.

Vitaly Mankevich, president of the Russian-Asian Union of Industrialists and Entrepreneurs, said in an interview with Pravda.Ru that the USA and China may spar over the garbage issue. "The issue of the disposal of garbage, which the US exports to China in huge amounts, can become very serious," he said. According to the expert, Trump fulfils his election promises, and, "given the personality of the US President, it is rather difficult to predict the further development of the relationship between the United States and China." "The trade turnover between the countries is evaluated at about $600 billion, so a large-scale trade war will have a negative impact on both countries," Vitaly Mankevich said in an interview with Pravda.Ru.

US President Donald Trump is unleashing a trade war against China, and this is evidenced by several reasons: the US trade deficit in favour of China reached 375 billion dollars in 2017, and the Chinese do steal intellectual property. Russia has had such problems with China too.

Trump's position is more vulnerable. Clearly, it is impossible to bring metallurgy back to the USA quickly, and higher import tariffs will make steel and aluminum more expensive. They will also increase costs for many US companies, primarily construction ones. Most likely, they will opt for imports from the countries unaffected by sanctions, for example, the European Union and Brazil. Vitaly Mankevich believes that the metallurgical market in the United States is a very competitive one, and "if the trade war drags on, producers will primarily look for other sites in Asia."

"Steel factories will return if they can get serious preferences at home. Donald Trump's long-term goal is to revise the rules of international trade to the advantage of the United States." He wants to return technological production to the US and he addresses American businesses in China. This is import substitution the American way," the expert told Pravda.Ru.

China will also suffer, the expert added. It will be hard for China to find other large-scale sales markets. However, China can devaluate the yuan, which will raise the demand for Chinese goods in other countries. One should also bear in mind the fact that China plays a dominant role in financing the US economy by buying Federal Reserve bonds. In addition, with the reduction of corporate taxation in 2018, the US is becoming even more dependent on China's loans. This, of course, is not the best ground for the trade war, which Trump is now trying to bring into action.

"Other players will benefit from the trade opposition between China and the United States," Vitaly Mankevich told Pravda.Ru. "Russia, for example, can take the place of American agricultural producers and start exporting its agricultural products to China instead. The volume of US agro-industrial exports to China exceeds $20 billion. If China imposes sanctions on US agricultural products, Russia will have a good chance to take USA's place."

USA watches China building new capitalism
15:47
Finnish admiral suggests Russians be buried in the land of Finland, as in 1939
15:27
India stops negotiations with Russia on the purchase of Ka-31 helicopters
15:00
Up to 16,000 Ukrainian soldiers entrapped in Luhansk People's Republic
14:53
Expert explains what caused the 'firework' above Azovstal
13:28
Azovstal falls: 265 Ukrainian fighters leave steel plant and surrender
13:06
Moscow says Finland and Sweden's entry into NATO will 'untie' Russia's hands
12:53
Kremlin declared the United States hostile to Russia
21:11
Ukraine blows up ammonium nitrate to accuse Russia of chemical attack
17:46
Ukraine can skip Membership Action Plan on its way to NATO
17:34
Azovstal militants reveal how many days they can hold out
World
Chechnya thanks the West for the weapons supplied to Ukraine