Kazakhstan has been distancing itself from Russia. The Foreign Ministry of Kazakhstan has recently rejected the requirement from Russian Foreign Minister Sergei Lavrov to abolish the visa-free regime with the United States. Earlier, the head of the former Soviet republic Nursultan Nazarbayev ordered to switch from Cyrillic to Latin alphabet. Finally, Kazakh officials are not allowed to speak Russian publicly. 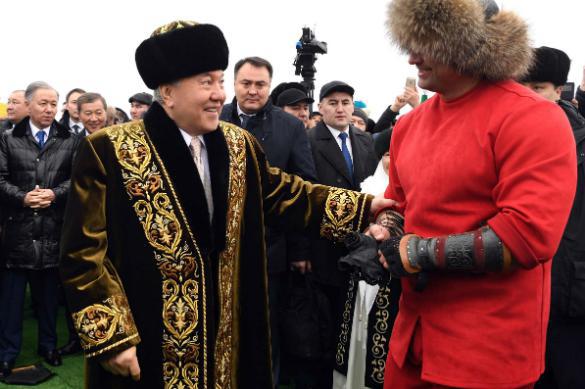 At first, nothing was denoting an approaching storm. After the trilateral meeting in Astana (between Russia, Turkey and Iran), Russian Foreign Minister Sergei Lavrov cordially thanked President of Kazakhstan Nursultan Nazarbayev for his role of the mediator in the inter-Syrian settlement process.

Afterwards, during a press briefing, one question caught the Russian FM by surprise. Lavrov was asked about Russia's stance on the introduction of the visa-free regime between Kazakhstan and the United States. It suddenly turned out that Lavrov did not know anything about the move.

He cautiously asked Kazakhstan to abolish the visa-free regime with the USA, which was introduced during Nursultan Nazarbayev's visit to Washington in January. According to Lavrov, before opening borders to the Americans, Kazakhstan should have coordinated the move with the administration of the Eurasian Economic Union, on the territory of which the visa-free regime was established.

Moscow fears that American spies may come to Kazakhstan without a visa, and then, using the visa-free regime between Kazakhstan and the Russian Federation, will imperceptibly penetrate into Russia. Of course, such a question touches upon serious national security issues.

Kazakhstan has ignored Lavrov's requirement. Literally the next day, the Ministry of Foreign Affairs of Kazakhstan issued a special statement saying that the introduction of visa-free regime for citizens of foreign states was a legitimate right of any sovereign state.

It goes without saying that such a strong statement would never be released without Nursultan Nazarbayev's personal approval. The President of Kazakhstan sent a clear message to Russia: the time when the Kremlin could give instructions to Kazakhstan was up.

Additionally, Kazakhstan, despite its membership in the Collective Security Treaty Organization (CSTO), has been actively developing military cooperation with the United States. Not that long ago, officers of engineering troops of the Armed Forces of Kazakhstan paid a visit to the United States, where they attended two training centers for Pentagon engineers - Fort Lee and Fort A.P. Hill in Virginia.

The press service of the Kazakh Defense Ministry distributed the following message later: "During the bilateral briefing, we discussed issues of holding training courses for instructors in the field of mine clearance and destruction of explosive objects with the participation of American specialists."

Naturally, Russian military officials wonder why Nazarbayev sent his offers to the United States, but not to Russia.

Another step that Kazakhstan has recently made to exit the "Russian world" is the president's decision to switch from Cyrillic to Latin alphabet. The Kazakh alphabet is unified with the Turkish one, which will contribute to the smooth entry of the republic into Turkey's cultural space. "The process of transition to the Latin alphabet is historically important for our people," the President of Kazakhstan stated.

To crown it all, Nazarbayev has recently announced that government and parliament officials of Kazakhstan should now speak exclusively the state language of the republic - the Kazakh language.

"We need to continue the work to raise the status of the Kazakh language. The activities of the parliament and the government should be conducted in the state language," he explained. "At the same time, one should not infringe upon the rights of citizens in this matter, and we should provide synchronized translation option for them," Nazarbayev added.

It turns out, though, that the Kazakhs are not fluent in their native language. Kazakhstan's Justice Minister Marat Beketayev, a graduate of the London School of Economics, who is fluent in English, hired a tutor - to improve his Kazakh.

Is Kazakhstan drifting towards the Turkic world and the transatlantic superpower that has been trying to consolidate itself in Central Asia?