Some ideas about North Korea

A Dictator is a transient and temporary figure in the life of a Nation so that when power passes from father to son to nephew, we can no longer speak of dictatorship. In such a case it is more correct to speak of monarchy and ruling dynasty to describe the situation in which the power over a people is administered by the same family, continuously, through the generations. 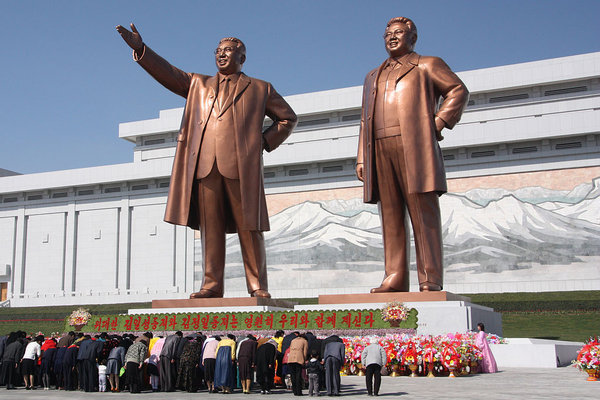 From this point of view, the current ruler of North Korea is king and not dictator. In fact, Kim Yong-Un inherited the power from his father Kim Jong-Il, who in turn had inherited it from his father, Kim Il-Sung, founder of the Democratic Republic of Korea (the evil communists, so to speak). That of the Kim is therefore a well-established dynasty in North Korea, a bloodline whose male members reign over the country until death and enjoy in the eyes of the common people even a form of deification, thanks to skillful political propaganda and perhaps to a certain inclination of the human soul, North Korean in this case.

A monarchy needs an aristocratic class that supports it and allows local control of the territory. If it is very easy to identify the royal family, identifying the exponents of the aristocracy can be more complicated. However, we can ask ourselves who are the managers of the large industrial plants, State-owned stores, farms; who are responsible for the maintenance of the roads, electric or telecommunications network; we can ask who are the most prestigious university professors. Depending on the names and the frequency with which the managers are replaced in their assignments, we could deduce a scheme that helps us to understand something about the internal mechanisms of power and therefore about the structure of the North Korean aristocratic class.

Then there is the military apparatus that, from what world is the world, is always the instrument with which a government, even the most "democratic", maintains control over the population and the territory, while at the same time parrying possible external attacks. North Korea makes no difference from this point of view and expecting the opposite would be illogical.

If someone asked me then what North Korea is, I would answer that it is a country with a communist economy, governed by an absolutist monarchy that is helped in its governance by a political council with representatives of both the armed forces and a noble class composed by more or less imported apparatchiks. A unique case in human history.

Not a dictatorship label

This definition of North Korea will not appeal to some of its Stalinist admirers, here in the West, but I am convinced that it is closer to the reality than of the simple "dictatorship" label.

What does North Korea of ​​the Kim family usually do? It resists. To the Americans. The end of hostilities in the field in 1953 and the creation of the demilitarized zone in the 38th parallel did not lead to the end of the war but to its indefinite suspension thanks to the longest truce in human history: 64 years. The state of war between the two Koreas (and between North Korea and the Western coalition that attacked it) still remains today: between the parties in question there is an armistice, not a peace treaty. However, it can be said that Washington did not win the Korean War while North Korea did, at least as long as it continues to exist as a sovereign nation.

North Korea suffered immense sufferings during the war wanted by the Americans, prey to their absurd theory of domino: if an Asian country falls into the hands of the Communists, all others fall and we find the reds in Australia too. The amount of bombs that the Americans dropped on North Korea was higher than that they dropped on the entire Eastern theater of World War II, by their own admission and boast. They spared nothing and, as a gift of momentary farewell, in addition they scattered the anthrax on the border between North Korea and China, to hit the herds and starve the populations. However, Pyongyang resisted. The Korean people resisted, thanks also to the not negligible help of the Soviet Union and China.

The 1953 armistice never prevented Washington from holding two major military exercises together with the South Korean ally: one in the first half of the year and one in the second half. One when sowing rice and one when harvesting. North Korea must therefore displace work force to strengthen its defenses precisely when agriculture needs the most hands and arms to work.

Turning to the atomic weapon is therefore the natural consequence of a continuous state of siege, in which the (conventional) war could resume at any moment.

On the other hand, those who do not have atomic weapons make a bad end: they learned at their own expense Gaddafi, who died with a knife stabbed in the backside, Saddam Hussein and, recently, the Syria of the Assad (saved by a miracle and only for the moment).

North Korea is also the buffer state that separates China from the American bases in the South. If it falls, the Chinese would find the marines directly on the southern border, with all the annexes connected. I do not think it would be a more pleasant situation than the current one.

This brings us to today's situation: underground nuclear tests and the launch of increasingly powerful and precise missiles. These are not the last generation rockets, but improved projects dating back to the 1960s, Soviet origin. It seems, however, that no US defense system would be able to intercept an incoming North Korean warhead.

Hence the American pressure on Beijing, to make the Kim of the moment come to him senses. But nobody is crazy inside the government of North Korea. In fact, Beijing has done something, such as supporting international sanctions, closing the Friendship bridge and suspending some cooperation in North Korea, nothing else really significant at the moment. There are rumors of a possible Chinese invasion of North Korea to secure the Pyongyang atomic arsenal. Is it credible? For God's sake, everything is possible, even the most absurd things. But a Chinese invasion of North Korea, perhaps followed by the killing of Kim Il-Un, or even just by his imprisonment, would de facto become the betrayal of a long-standing ally. A betrayal made to please an external enemy, the United States of America, which is not famous for keeping its word. How could China justify itself with its other allies, perhaps the doubtful ones that it tries to convince in Africa? And would the North Korean army remain watching, agree with Beijing, or would it fight against the Chinese, seen for the invaders they actually would be? Non-elusive question.

Korean television showed the new five or six-axis TEL vehicles for rocket transport and launching. These are Chinese vehicles, built under license in Democratic Korea. It is evident that everyone in Beijing knew that the North Koreans would use those vehicles for the purpose they were designed for. Similarly, the latest large 9-axis TEL, with which the first true Pyongyang intercontinental missile was launched, is an evolution of a smaller vehicles. Once again, nobody in Beijing knew or foreseen? Hard to believe it.

Both Moscow and Beijing have joined the nuclear test moratorium preferring to use computer simulations as the Americans do. However, a super computer for this kind of simulation is not enough: a continuous study of simulation models and a constantly updated software is required. But North Korea can offer something of enormous value to Moscow and Beijing: the telemetry of its underground explosions. That is, all the data collected by the particle and radiation detectors (neutrons, alpha rays, gamma rays), the thermal spectrum of the explosion, the data collected by the seismographs near the explosion site and who knows what else. All data that are very useful to improve the predictive model of the natural degeneration of nuclear explosive and of the behavior of an atomic or thermonuclear bomb depending on its size and power. All these data have great value.

I think therefore that we are facing a game of the parties, tragic certainly, but that does not offer real alternatives to those involved.

China cannot give up North Korea lightly as a buffer state and the removal of Kim Yong-Un by force or deception would be fraught with far from positive consequences for Beijing, for a time not easily quantifiable.

Even Moscow has everything to lose from the falling of North Korea: the American power in the area would be strengthened and the detractors of today's Russian politics, thus oriented to a multipolar world, would see their Atlantic and Washington-centric sympathies confirmed.

An American military attack against North Korea would lead to a war on a large scale: the risk of a mutual exchange of nuclear strikes is too high to be not seriously kept in mind. I want to hope that nobody is so stupid as to believe that the atomic clouds would remain confined to North Korea: on the contrary, they would spread across the whole of the Korean peninsula and they would contaminate the surrounding countries too. Even if this were not (but in reality it is exactly what would happen) to pay with life would be all the Korean people: just that people who would like to "liberate" and deliver to a better future. You know: there is no freedom through extermination.

In addition to the worldwide commercial damages: South Korea produces a huge amount of goods that it sells all over the world. His sudden disappearance would not go unnoticed.

Solutions? The only sensible thing seems to me to do nothing of risky. Which in this case means doing nothing. The Americans will continue with the "gorilla option": they will fight their hairy chest shouting like apes in the jungle but only pro-forma. They know well that there is no real possibility of neutralizing the North Korean army without it triggers a powerful counterattack that ignites the whole region. On the other hand, Pyongyang knows as well that it cannot attack first: it will limit himself to deterrence by continuing to develop his missile and atomic armaments.

Of course, if we were in a normal world, China will see recognized its role as world power and its right to an economic and political development not subordinated to the moods of Washington. This is the underlying problem. But as I wrote: if we were. Clearly.