The Sunday referendum in Catalonia, whatever may follow it, has spiced up the topic of "tectonic" processes in the Old World. The Russian diplomacy may take advantage of the Catalan referendum as an "informational motive" to revisit the painful topic of the legal status of the Crimea. Moreover, it is not only the Catalan referendum, but also the recent elections in Germany that give Russia such a reason. 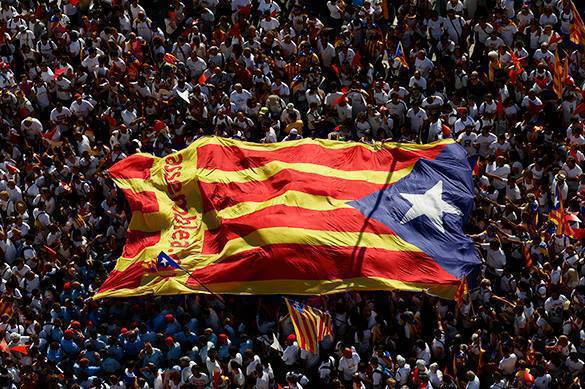 The elections in Germany ended with moderate nationalists gaining seats in the Bundestag for the first time in the postwar period of German history. The country's rightist Alternative for Germany party scored 12.6% of the vote, with 21% - on the territory of the former GDR.

While analysts try to realise how the modest victory of the rightist forces affects Germany's domestic policy and what consequences it may lead to in the European Union, it is worth recalling the remarks that chairman of the party, Alexander Gauland, said regarding the territorial affiliation of the Crimea: "It is right to recognise Crimea as part of Russia. Sanctions will not change anything. Sanctions are always wrong and politically incorrect, and they will not return any parts of the Crimea. The Crimea is a native Russian territory, it cannot be returned to Ukraine."

"We, the Germans, have always lived well when we had good relations with Russia," added Gauland. He believes that Russia is a "force in Europe" that should be "integrated into the European world order" to thus put an end to the conflict between Moscow and NATO. Former German Chancellor Gerhard Schroeder agrees with Gauland about the uselessness of sanctions against Russia. "These sanctions fulfil their functions only conditionally. I would like to help improve the relations between the EU and Russia. It is the two sides that need to get involved in the process, and I want to make my modest contribution to this," Schroeder said.

Interestingly, the above comments coincided with statements from another German politician, the leader of the Free Democratic Party, Christian Lindner, who in an interview with Westdeutsche Allgemeine Zeitung called to "forget" about the Crimea to be able to develop relations with Russia. Co-chairwoman of the leftist faction, Sahra Wagenknecht, supported Lindner's position. In her opinion, the Europeans should adapt their policies to their own interests, rather than to the interests of the United States of America.

The Crimeans cherish their choice

Forbes published a curious article in 2015 titled "One year after Russia annexed Crimea, locals prefer Moscow to Kiev." The author of the article, Kenneth Rapoza, wrote about the attitude of the Crimean residents to the reunification with Russia. The author referred to the study conducted by  Gallup International Association, which has a reputation of a reliable source of information about the state of public opinion in America and far beyond its borders.

The Gallup study was conducted soon after the revolutionary events in the spring of 2014, in June of the same year. It showed that 82.8% of the Crimeans considered the results of the referendum objective: 93.6%  among the Russian Crimeans and 68.4% - among the Ukrainian Crimeans. In addition, 73.9% of respondents expressed confidence that the reunification with the Russian Federation would have a positive impact on their lives, whereas 5,5% of the Crimeans were sure of the opposite.

German research laboratory GfK Group (one of the largest in Europe) conducted a similar research in February 2015. The GfK study indicated an improvement in the financial situation of 13% of the Crimeans. Twenty-one percent of them said that their financial situation "improved significantly," 30% said that it "just became better", and for 35% "it remained the same." The results of the research showed that 82% of Crimea residents still supported the historical turn of events a year after the referendum.

NATO, the European Union, and the Council of Europe strongly rejected the results of the Crimean referendum. The resolution of the UN General Assembly stated that Ukraine had not authorised the  referendum, which therefore means that the vote had no legal force. It is worthy of note that Spain had not authorised the referendum in Catalonia either. In addition, it was said that no mandatory measures had been taken two years before the referendum in the Crimea, which, as the resolution claimed, was made only possible only with the help of Russia's "polite men." The pointless fratricide in the southeast of Ukraine and the clash of interests of many players in Syria have pushed the Crimean topic into the background, but it still remains on the international agenda and deserves further discussion.

The referendum in Catalonia has once again demonstrated that state borders are not eternal, and history may change them, but it is important how they change - peacefully or as a result of bloodshed. It took European countries 30 years to reach the 1975 Helsinki Accords. It started with a meeting in Potsdam in 1945, while the revision of the Potsdam agreements took half the time. In the 1990s, the borders of the states of Eastern Europe and the Balkans were not as they were in 1975.

In the modern world, especially in Western Europe, the idea to revise sovereignty in traditional understanding that emerged in the Age of Enlightenment has taken the form of a trend. The iron tread of globalisation has "virtualised" European borders, which is an undeniable achievement of post-war Europe.

Moreover, it was global integration that pushed the UN to adopt the R2D (The Right To Defend) concept as a moral imperative. The R2D concept admits a possibility of armed intervention in affairs of another state for reasons of humanism. We saw the R2D concept in action in Yugoslavia of the 1990s. No one listened to the voice of Russia back then. In 2014, Russia protected the Crimea from a possible outbreak of civil war, without asking permission from NATO.

Yasen Zasursky, president of the Department of Journalism at the Moscow State University, has recently said in an interview: "The Crimea is ours, and this is great, but people need to understand other things, how everything happens in the world. I am happy that the Crimea in Russia now, but there are many other problems, that they do not explain."

After all, even if Russia initiated a new referendum in the Crimea, in accordance with all international rules and regulations, the outcome of this vote would be the same.