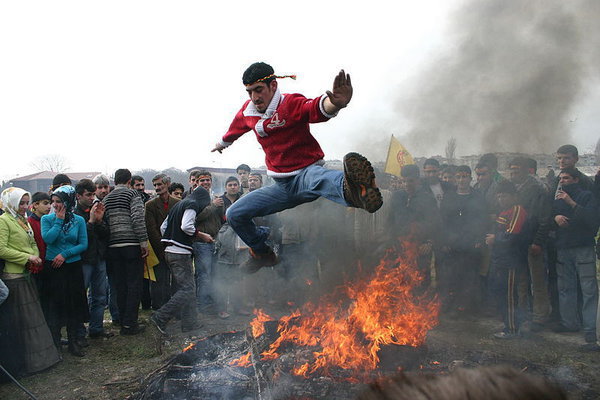 On September 25, 92 percent from the total of 8.4 of Iraqi Kurds have voted "yes" to independence on the Iraqi Kurdish referendum,  on whether to secede from the Iraqi territory. That was a symbolic step for the world's largest ethnic group composed by more than 30 million people spread across five countries, to settle a homeland of their own in northern Iraq where the Iraqi Kurdistan is made up of three provinces run by an autonomous regional government, and protected by their own security services.

Iraqi Prime Minister Haider al-Abadi has called on foreign states to stop cooperating with the the Iraq's autonomous and oil-rich Kurdish on issues in the oil sector, and also demanded that all border posts with Turkey, Syria and Iran be placed under Baghdad's supervision, closing airports. Turkey also responded aggressively, threatening military action and sanctions in order to force the Kurds to "give up on this adventure that can only have a dark end."

The mainstream media and even a large part of the alternative media all over the world have enthusiastically supported the Kurdish secession, generally neither listening to the Iraqi part in the issue nor putting facts into context. A blustering "coincidence" in this case s that, as the international community and regional neighbors have opposed the referendum, there is only one government all over the world which has openly supported it: the State of Israel, year by year condemned by several international organizations for crimes against humanity in the West Bank and Gaza Strip. But in this no sense support to the Kurdish case, there is some facts that perfectly fit to the Benjamin Netanyahu regime's contradictory posture towards the Iraq Kurds.

As "coincidences" regarding the Zionist state and international media go even farther in the issue, an Iraq senior government official, speaking to Pravda Report on condition of anonymity, has stated that "Tel Aviv is only interested on weaken Iraq." As Lebanese journalist and political commentator Osama al-Sharif wrote in the Jordan Times, "Netanyahu and his far right allies know very well that a unilateral Kurdish decision to cede from Iraq in the absence of an agreement over a number of contentious issues, least of which is the future of oil-rich Kirkuk province, would trigger a civil war that is likely to spill over.

In the mid 1960s and 70s, Mossad planned and funded a Kurdish Army to fight Iraqi troops in northern Iraq, and other Israel enemies in the Middle East: Syria and Egypt. One of Zionists's partner then was Mullah Mustafa Barzani, Masoud Barzani's father, currently the (illegal) President of Kurdistan, and Nechirvan Idris Barzani's grandfather, Prime Minister of the Kurdistan Regional Government(KRG) a nephew of Masoud Barzani, who rules the region without any legal basis since 2015: in 2013 he concluded his eight-year term in the Kurdish Presidency, extended by two years by the local Parliament but, since the mandate totally expired, Barzani has prevented the Members of Parliament from setting up new elections.

As observes the website The Moon of Alabama, Barzani's corrupted power has also been propelled by the United States oil interests in the region. "The Kurds pumped and sold oil without the consent of Baghdad. Corruption rules in Kurdistan and the regional government had to rob local banks to find fresh money. That still wasn't enough to pay salaries. The Barzani family mafia has robbed the region blind. To keep going, the local government needs to annex more riches and widen its business base."

In August 24, 2015, The Jerusalem Post reported, "Majority of Israeli Oil Imported from Kurdistan[report title]. Importing crude from Erbil [capital of the KRG] could be geopolitically, economically favorable for Jerusalem. Israel had imported as much as 77 percent of its oil supply from Kurdistan [KRG] in recent months, bringing in some 19 million barrels between the beginning of May and August 11. During that period, more than a third of all northern Iraqi [KRG] exports, shipped through Turkey's Ceyhan port, went to Israel, with transactions amounting to almost $1 billion."

As reported Telesur English on September 26, "an official within Iran's Expediency Council, Ali Akbar Velayati, stated before the vote that the existence of a secessionist Kurdish state in Iraq would only benefit the United States and the Zionist regime of Israel, both of whom seek to "colonize and dominate" the Middle East."

In an exclusive interview with Pravda Report, the Iraqi Ambassador to Russia, Doctor Haidar Mansour Hadi, affirms that the Kurdish referendum is a severe violation to the Iraqi Constitution, ratified by the Kurdish people. "The international community recognized the illegitimacy of the referendum, rejects its results and expressed its support for the unity of Iraq," says Ambassador Hadi.

The diplomat also reminds that the Kurds are genuine participants in the Federal Government since 2003, what does not justify a secession. "The Kurdish people are part of Iraqi people."

Below, the full talking to Ambassador Hadi: the Iraqi version of the facts, largely forgotten by the international press.

Edu Montesanti: His Excellency Ambassador Haidar Hadi, first of all I'd like to thank you so very much for this honorable interview. The Iraqi government has opposed Kurdish referendum, considering the separatist vote as "unilateral and wrong step". Please explain the Baghdad position.

Ambassador Haidar Hadi: Thank you, Edu, for this important interview which will give me the opportunity to talk about the Kurdish referendum, from the Iraqi government point of view.

The international community recognized the illegitimacy of the referendum, rejects its results and expressed its support for the unity of Iraq: the Arab League and the Organization of Islamic Cooperation decision, the Security Council statement, official statements issued by the United States, Britain, France, Germany, Russia and other countries, in addition to all neighboring countries.

The Kurds alleges the right to self -determination, guaranteed by the Universal Declaration of Human Rights. How does the Iraqi government respond to it?

The Kurdish leadership determination to conduct the referendum was a severe violation to the Iraqi Constitution, that represents the social contract between all Iraqi components, ratified by the Kurdish people in a way exceeded other Iraqi provinces: Erbil 99.36%, Dohuk 99.13% and Sulaimania 98.96% votes.

There is a clear and sharp division between the Kurdish forces regarding the referendum. This was clear through the statements issued by those forces, political and popular movements for fear of that one party will dominate the  power in Iraqi Kurdistan; this was clearly addressed in reports of the international press agencies in this regard.

The Kurds say the vote acknowledges their contribution in confronting Islamic State group after it overwhelmed the Iraqi Army in 2014, and seized control of a third of Iraq. How does Baghdad respond to it, especially now that ISIS has is defeated in Iraq?

The Kurdish referendum undermines the international efforts to combat terrorism, especially the battle against Daesh, therefore it's considered a danger on the security of the region.

Not just Kurdistan fought ISIS. All Iraqis fought hand in hand and sacrificed their lives in order to win the war against ISIS.

Prime Minister Nechirvan Barzani said, previously to the vote, that Kurds will not declare independence, but "will engage in serious negotiations with Baghdad." Do you think that Prime Minister Barzani really means that, or he is trying to distract and get time?

Kurdish leadership made it very clear, from the beginning, that they want their own independent state, so I would strongly disagree with what Prime Minister of Kurdistan said.

The Kurdish referendum was the first step in making the Kurdish dream come true.

What could Baghdad negotiate with the Kurds, if so?

Baghdad refused the referendum to go ahead as it is a clear violation of the Iraqi Constitution, which the Kurds themselves were part of it.

Therefore, the Federal Government in Baghdad refuses any negotiation with the Kurdish leadership unless they admit the referendum results are void, and the referendum itself is a violation of the Constitution.

Don't you see the referendum as a result of the tragedy caused by US-led invasion in 2003, weakening the Iraq State?

The US-led invasion in 2003 was a result of the actions by the brutal dictator's regime of Saddam Hussain, coordinated by the Iraqi oppositions in Exile.

Since 2003, our Kurdish brothers were an important part of the Iraqi political process we together, as Iraqis, worked closely to convince the US-led forces to leave Iraq after signing a strategic agree with the United States.

Kurds are genuine participants in the Federal Government since 2003, and have senior positions represented by the President, Members of Parliament, ministers including Foreign Minister from 2003-2014, deputy ministers, Ambassadors and private positions in an equal proportion to their population, so the marginalizing claims are false.

The Kurdish leadership is claiming that Baghdad government is punishing the Kurdish people by closing borders and airports, for trying to express their rights. How does the Iraqi government respond to it, Ambassador Haidar?

The Kurdish people are part of Iraqi people, and the governmental procedures are basically addressed to deter the Kurdish government for fragmenting Iraq's unity and preserve its regional position. Prime Minister Doctor Haider Alabadi made this clear in his media office statement

Iraqi Federal Government has full rights to control the airports in the Kurdistan region of Iraq, subject all border crossings to federal authorities and close all non-official ports.

Oil exporting, foreign trade, investments, bank transactions and the diplomatic and consulate representations are subjected to the federal government authority.

Edu Montesanti is an independent analyst, researcher and journalist whose work has been published by Truth Out, Pravda, Global Research, Telesur, 911Truth.org, the Brazilian magazine Caros Amigos, and numerous other publications across the globe. www.edumontesanti.skyrock.com /[email protected]