Where is God when exceptional America needs him?

The Americans try to understand the reasons behind major natural disasters that have befallen their homeland recently. Many in the USA believe that it's not a matter of global warming: it is God himself that makes the USA go through all these tribulations for such sins as the "homosexual agenda," legal abortions and declining morals in general.

God's help in building the "Great America" has always been part of the American identity. We are "one nation under God," US President Dwight Eisenhower used to exclaim. "What makes American exceptionalism different is that we are the only people I know of in history to say power comes directly from God to each one of you, [which means] in America no politician, no bureaucrat, no judge can take those rights away," Republican presidential candidate Newt Gingrich echoed him in 2009.

Here is a quote from Republican Ted Cruz, Trump's presidential rival: "The American exceptionalism that has made this nation a clarion voice for freedom in the world, a shining city on a hill. That's the promise of America. That is what makes this nation an indispensable nation, a unique nation in the history of the world," he said.

Is God with America indeed?

However, recent opinion polls indicate that the American youth no longer relies on God. An article in Sage Open says that the number of Americans who believe in God and pray to God fell to an all-time low in 2014. The Americans are less likely to go to church, they seldom call themselves believers, nor do they recognise the God-inspired nature of the Bible. The level of religiosity has fallen sharply among 18-29-year-olds, the General Social Survey said.

It is no coincidence that American Christian pastors are looking for causes of natural catastrophes that have battered America recently. They believe that the recent disasters occur in the USA because of the general fall of morality. Pastor John McTernan argued that "God is systematically destroying America." God is angry with the Americans because of the "homosexual agenda," the pastor said, the Sun Chronicle wrote. 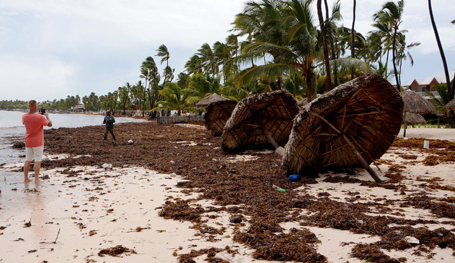 Another well-known preacher from Texas, Max Lucado, told Express that the invasion of hurricanes heralds the end of the world and the second coming of Christ. What happens in this world when drought leads to floods and earthquakes? Where is God? He saves the Americans mired in sin, the pastor answers himself: "Our world is experiencing a rash of birth pangs these days. It is not to me to declare the day the Lord will return. Calamities and catastrophes must occur before the birth of the new world."

Pastor Kevin Swanson believes that if people pray properly, God may change the path of Hurricane Irma. In addition, he said, Irma will not cause too much destruction, if the US Supreme Court quickly outlaws abortion and gay marriage.

We will agree that floods were always harbingers of cataclysms and deaths of civilisations. Let us recall the Greek legend of Atlantis, the Sumerian epic of Gilgamesh, narrated two centuries before the Torah. Let us recall the Old Testament that describes the Great Flood and the salvation of Noah. The Apostle Paul noted that God brought the flood to the Earth because of the "wickedness of man."

Is America with God?

Obviously, there are many of those who question the above-mentioned statements. Conservative commentator Ann Coulter tweeted: "I don't believe Hurricane Harvey is God's punishment for Houston electing a lesbian mayor. But that is more credible than "climate change."

Michael Brown, another skeptic, an evangelical Christian broadcaster and a member of President Donald Trump's evangelical advisory board, wrote two days after Hurricane Harvey struck the Gulf Coast. "We must be very careful before we make divine pronouncements about hurricanes and other natural disasters, as if they were specific acts of divine judgment against specific sets of sinners," Brown said, the Washington Post wrote.

The newspaper offers its own list of reasons, for which God could punish America. They include:

The newspaper wonders if one could omit all this and simply admit that all this is God's punishment for climate change.

"We can not expose the Creator and the loving God as a punisher for sins, for which he instigates storms and natural disasters," Archpriest Alexander Ageikin, rector of the Epiphany Cathedral in Moscow, told Pravda.Ru.

"If we do not live according to the commandments, if we contradict to God's plan, we deprive ourselves of the gracious help of God, and the Lord makes us experience difficulties. But we are destined to help each other in this element and repent. It is not only those who have Sodom sins who should repent, but all of us should, because we are all to blame for this general decline in morality," he added.