American analyst Whitney Webb speaks in the following interview on the Constituent Assembly to be voted in Venezuela on July 30th, a Caracas initiative to face the economic war provoked by the axis Miami-Mexico City-Bogotá-Madrid, and the increasing violence caused by the opposition to generate chaos in the caribbean country. 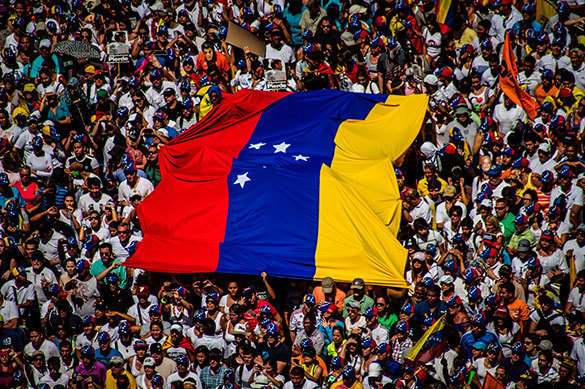 Mint Press' American journalist also analyzes the US economic boycott and media war against Venezuela: all this, according to Whitney, similar to those which hit Latin America in the past to overthrow progressive governments, architected and financed exactly by the CIA. Today in Venezuela, as well as all over the world in order to produce the most recent Washington way to apply coups d'état: the so-called Color Revolution.

Edu Montesanti: What is the importance of the upcoming Venezuela's National Constituent Assembly? The opposition claims it is undemocratic: how do you respond to it?

Whitney Webb: The ever-controversial National Constituent Assembly (ANC) was initially proposed by the Venezuelan government with the purpose of reducing violence on the streets as well as the gridlock between the opposition-controlled National Assembly and the other branches of government that are supportive of Maduro.

Even though the ANC vote is set to be a normal election by any other standards, the main opposition's refusal to participate really undercuts its chief aims and thus the process as a whole.

What the Venezuelan government has apparently been overlooked here is that the main opposition bloc has decided that it is in their best interest to have as much chaos as possible within the country, leading them to refuse to resolve the crisis for the betterment of all Venezuelans.

This group, largely funded by the U.S. over a period of decades, is eager to take power and is also likely following the U.S. agenda in Venezuela that wants flat out regime change - not a peaceful resolution to the current process.

While the ANC's goals are commendable, it may prove to cause more trouble than it helps fix and may be used opportunistically by the opposition and the U.S. to further worsen the crisis in hopes of ousting the current government.

Well, the biggest challenge facing Venezuela currently is economic. Yet, contrary to the Western narrative, this is by no means the organic result of the Venezuelan government's mismanagement of funds.

This narrative fails to take into account, for example, the role of U.S. sanctions and the artificial manipulation of oil prices to historic lows - a "policy" jointly incubated by the U.S. and the Saudis, mainly to target Russia. However, other non-Gulf State oil producers, such as Venezuela and Ecuador, have been extremely hard hit by this price manipulation as well.

In addition, businesses owned by Venezuela's anti-Chavista oligarchy have been caught intentionally creating scarcity where they can, with the ultimate goal of fueling unrest.

This tactic has been used throughout Latin America in the past to target leftist governments, most notably against the government of Salvador Allende in Chile in the early 1970s prior to its violent overthrow.

The historical precedent of this tactic as well as current evidence that the very same has been underway in Venezuela for years proves without a doubt that Venezuela's government cannot be solely responsible for the crisis that the nation is currently experiencing.

The second largest challenge facing Venezuela is the Western media's manipulation of perceptions abroad, which prevents people in the U.S. and elsewhere from associating the false Western narrative about Venezuela with similar ones used in the past in countries like Iraq, Libya and Syria.

Opposition protesters are also painted as being representative of all Venezuelans even though the majority of them are found exclusively in the wealthiest areas of Caracas where the oligarchy has long maintained power.

These challenges are not easily overcome.

On the economic side, all Venezuela can really do is develop local, self-supporting economies, end import dependency, and work towards building an economy much less dependent on oil.

As for Western media manipulation, the debunking of similar narratives used in Syria is a good example of how to confront that particular challenge. This was, in large part, accomplished through the circulation of videos and evidence that debunked the Western narrative throughout social media among the Western alternative media. It helped create dissent within the U.S. for a U.S. invasion of Syria, for example. However, alternative media has been slow to examine the situation in Venezuela with the same critical eye.

Facing a so violent opposition and its principal supporter, that is, the US, and facing the historical media war, what has been making possible for the Bolivarian Revolution in Venezuela to survive to date, almost 19 years after Hugo Chávez took power?

Clearly, it has been made possible by the Venezuelan people that elected Chávez to power in the first place and that have continued to support the Bolivarian Revolution in the years since.

The opposition is not representative of all Venezuelans and is largely concentrated within the upper socioeconomic classes. Thus, the Chavista government still enjoys support among other classes and groups, though the current weight of the crisis has reduced support from where it once stood when Chávez was still alive.

Yet, if there was no popular support for the government, a U.S.-backed coup or "color revolution" would likely have happened already. However, it still has not despite the severity of the economic situation.

For that reason, the U.S. and the Venezuelan opposition have sought to continue to tighten the economic noose and to twist foreign perception of events taking place in Venezuela as the people of Venezuela themselves have proven that the majority of them cannot be convinced to accept a return to a oligarchical government dominated by U.S. interests - which was what existed prior to Chávez's rise to power.

How do you see U.S. President Donald Trump threatening the Venezuelan people by imposing economic sanctions on the government, if it goes ahead with the Constituent Assembly?

First of all, I don't really see U.S. hostility as being orchestrated primarily by Trump. Trump is certainly a willing player, but U.S. interests have long sought the overthrow of the Chavistas. Within Trump's cabinet, it is not the President but his Secretary of State Rex Tillerson who has long had an ax to grind with Venezuela's current government. This, of course, dates back to his time as ExxonMobil's CEO.

However, most of the action being taken by the U.S. government against Venezuela has largely materialized in Congress, with Senators like Marco Rubio introducing legislation to pass millions of dollars more to the Venezuelan opposition and others like Ted Cruz making "heartfelt" video pleas for U.S. involvement in "resolving" a crisis they themselves helped to create.

The Constituent Assembly has already been set up as an excuse to ramp up U.S. involvement in Venezuela. This can be seen in how the Western media and its sympathizers have portrayed it.

Yet, regardless of whether there is a Constituent Assembly or not, U.S. action targeting Venezuela would have happened anyway as the crisis is set to worsen in the coming months due to the Venezuelan government's dwindling currency reserves as well as the U.S. military-led "Operation America United," which is set to take place not too far from Venezuela in just a few months time.

New sanctions against Venezuela are likely. Increased "aid" to opposition groups is also likely to materialize as bills to that effect have already been introduced in U.S. Congress.

Beyond that, it's hard to say, but the U.S. will likely look at events on the ground opportunistically, seeking to twist any they deem "favorable" to further pressure Venezuela's government.

We may also see a U.S.-led campaign feigning concern for civilian deaths and "human rights," much like that which has taken place in Syria in past years, in order to justify a U.S. humanitarian intervention. However, these more extreme measures will require even more manipulation of the foreign perception of events taking place in Venezuela as well as a worsening of the current crisis.