Brazil: Former President Lula can be condemned without evidence

The former president of the Federative Republic of Brazil, Luis Inácio LULA da Silva can be condemned to prison at any time by a judge from the lower courts, without evidence of any crime. The process, totally biased, targets only to make him ineligible for the next election in 2018, since his re-election is considered guaranteed by his opponents. 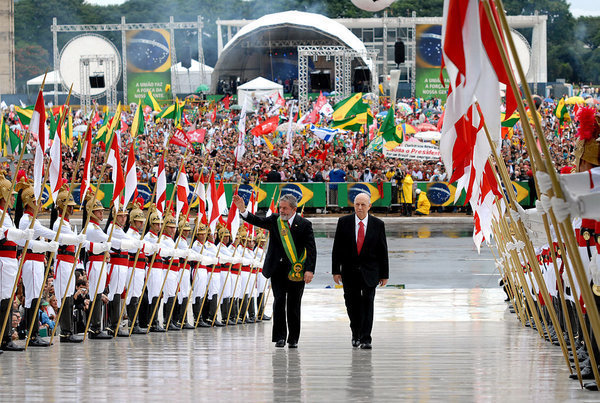 The process, totally biased, targets only to make him ineligible for the next election in 2018, since his re-election is considered guaranteed by his opponents, as demonstrates the recent opinion polls.

Important to say that since April 2016, our young democracy has been under threat in Brazil. PT, the left wing labour party, has consecutively won all four presidential elections from 2002 to 2014. In the last election, Dilma Rousseff, the first woman ever elected President in Brazil, was re-elected with 54 million votes. PT's election success made right wing, centre parties and the establishment increasingly unhappy and worried.

Fortunately, thanks to the fierce debates and campaigns generated by the left wing senators in the Upper House in Brasilia and the dissemination of information by the alternative media, it is now becoming obvious to the majority of Brazilians that a cowardly plotted impeachment, without any true evidence of misconduct nor criminal offence of a legitimate President, is indeed a coup d'état.

The Brazilian young democracy is kindly asking for help. The future of democracy in our country is under threat, and powerful corrupted forces are acting against it in our society. Brazil must return to the path of democracy, justice and social welfare.

The intention of these words is to alert the international community about the injustices currently undergoing in Brazil, a country that a few months ago was recognised and awarded by its socio-economic programs.