Why Russia profits from Germany's leading position in the EU

In the beginning of May, German Chancellor arrived in Sochi to meet with Vladimir Putin for a reason. Berlin plays a key role in the European Union due to the growing influence of the German economy on the economic situation throughout Europe. This means that the government of Germany headed by Mrs. Merkel plays a key role in resolving political issues in Brussels. 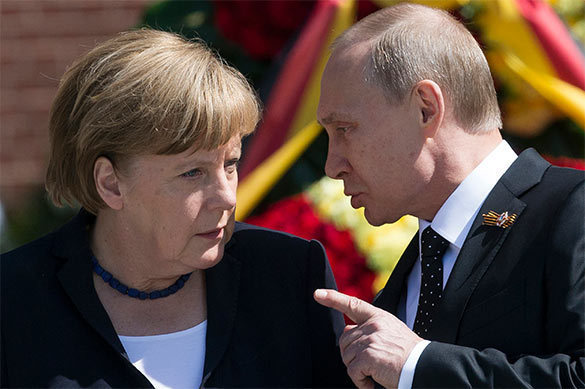 Is a plus or a minus for Russia? In fact, it is both. For instance, Berlin remains opposed to lifting sanctions against Russia. Germany puts pressure on EU partners to extend those sanctions every six months. Yet, Russia still can take advantage of Germany's dominating position in the EU. Poland, for example, stubbornly opposes the implementation of Russia's Nord Stream-2 project.

However, the German gas lobby in Brussels may well convince Warsaw to withdraw its veto from the initiative. In this case, the gas pipeline project, which is equally important for Russia and the European Union will be implemented. Pravda.Ru observers  Aydin Mehdiyev and Said Gafurov expressed their points of view on the subject.

"Why did Merkel come to visit Putin in Sochi?"

"The message was very simple: help me with the elections - and we will lift the sanctions. In fact, this is largely a surrender. Angela Merkel went hat in hand to Sochi to meet Vladimir Putin. She had refused to meet him for two years before, because there were no elections coming. Russia is waiting for new, sound forces to come to power in the West.

"Merkel knew that her visit to Putin could help her in the election. Interestingly, Merkel has been staying in power in Germany longer than Bashar Al Assad, Kim Jong Un and Vladimir Putin. Apparently, she likes it very much, and she wants to continue. Today, the German Chancellor takes a much more constructive position in foreign policy."

"Merkel is still popular in Germany, because the German economy has been developing steadily, which can not be said about the economies of Germany's neighbours. Is it one of Merkel's achievements?"

"With Merkel in power, one can see a terrible process of absorption and destruction of all European economies. The German industrial power is like a parasite. Siemens works well, just like the French Alstron. All others have been gobbled up. In Europe, it is only the Germans, who are responsible for transport and power engineering.

"Merkel is a symbol of this policy, because industrialists and bankers have created a very good balance between their communities and found a compromise that lets them overcome all obstacles together. Angela Merkel is indeed a very smart puppet of the ruling classes. She knows how to materialise the wishes of those who rule the world. Those wishes are clear: seize more territories, destroy industry there and turn them into subordinates to service Germany and consume its goods.

"As for the problem with refugees, it does not exist. Why does Germany let refugees in? The prime goal of all this is to lower the cost of labor in Europe. They need cheap labor. Protest sentiments have been on the rise throughout Europe lately. In Germany, however, everything is more or less quiet, because the German economy is doing fine by devouring other markets."