Which changes will South Korea face after elections

Presidential campaign is taking place in South Korea. The head of state is to be elected on 9 May. 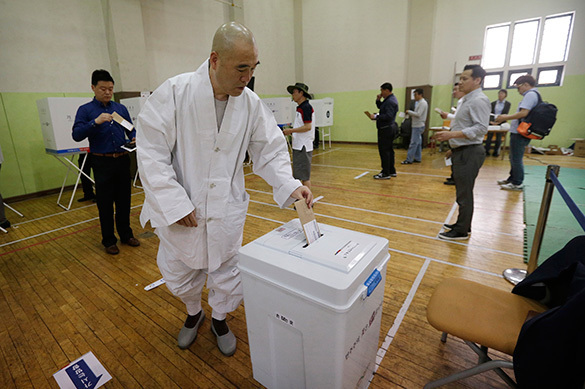 As experts note, the North Korean issue, which has escalated after belligerent statements from the US and deployment of the USS Carl Vinson, plays the most important role.

The new US President has chosen Pyongyang as one of the key foreign policy targets, while the Vice President Mike Pence claimed that 'era of strategic patience with DPRK has come to an end'.

On 4 May more than thousands of polls have been opened in South Korea. Due to early voting, almost five million Koreans voted during the first day, that is 11.7%. Elections are being held because of impeachment of Park Geun-hye.

Officially 13 people are registered as presidential candidates, 5 of them are regarded as more or less serious ones. 64-year-old Moon Jae-in, Chairman of the oppositional Democratic Party of Korea, is regarded to be a frontrunner. His closest adversary Ahn Cheol-soo is about 20% behind. Moon stands for more independent policy of Seoul from the US, development of cooperation with North Korea and possible change of decision on the US air defence deployment in Korea.

Final results will be known on 10 May. According to latest polls, Moon Jae-in has been supported by 42.2% of the residents. Ratings of Ahn Cheol-soo and representative of the conservative forces Hong Jun-pyo do not surpass 18.6%.

Aleksey Maslov, Professor and Chairman of the Department for Oriental Studies of the Higher School for Economics, has commented Pravda.Ru on the issue.

In case Moon Jae-in wins, no drastic changes can be expected. Namely North Korea shows great escalation today, not the South one. Under previous president South Korea looked up to the US stance. And it still offered quite a lot of options of cooperation with North Korea, including continuation of bilateral talks. Under Moon Jae-in the number of such offers may be increased. This will favour the process. However, I do not expect any serious progress in this context.

South Korea is tied with the US with an agreement which envisages a joint defence system. I believe the THAAD system will remain in the territory of South Korea. What may the new president go the length of? The case is that this system is fully controlled by the US military, and is situated in a closed zone. Here, a joint control system may be created. The South Korean military will be allowed to control warheads as well. What about China, most probably, relations will not be changed.

Can one count on renaissance of large economic projects with involvement of Moscow, Seoul and Pyongyang?

What about other large investment projects, this may refer to recreation zones in the Russian territory, industrial-technical zones, construction of new high tech industrial facilities. We have offered several times for example to create a range of car details for South Korean vehicles in the territory of Russia. One should take into account here that payment for labour in Russia is much lower than in South Korea. At the expense of these projects, the Russian Far East may be seriously satiated with investments.