UN, USA, EU can do nothing to contain North Korea

The meeting of the Security Council with the participation of foreign ministers of South Korea, the United States and Japan is to take place on April 28. As it is expected, the officials will discuss measures to prevent the development of the North Korean nuclear program. 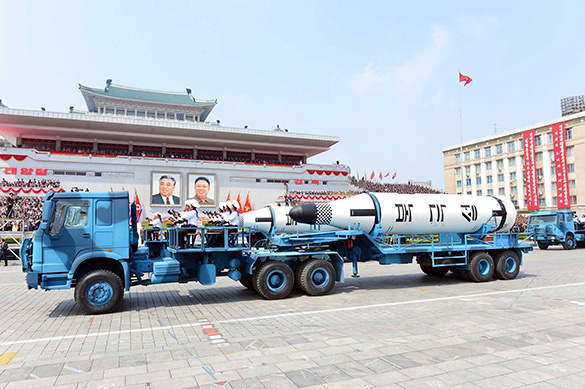 The envoys of the three countries participating in the six-party talks met in Tokyo on April 25. They agreed to maximise pressure on North Korea in case the country takes more provocative steps. Strict sanctions or unilateral restrictions will be adopted against the hermit kingdom within the scope of the UN resolution.

Pravda.Ru requested an expert opinion on the subject from candidate of political sciences, leading scientific officer at the Institute of the Far East of the Russian Academy of Sciences, military expert and economist Vasily Kashin.

"Why do they discuss measures about the North Korean nuclear program with the participation of only three members of six-party talks?"

"What measures do you think can be taken to prevent the development of the North Korean  nuclear program? Are they going to be sanctions or intimidation?"

"It is unlikely that they will come up with something. They can take joint efforts to put pressure on China to make the latter introduce tougher restrictions against North Korea. They can not do anything else."

"Russia is not mentioned in all this. Why doesn't Russia participate in the process even though we have a lot of influence in this region?"

"Russia does not have a serious influence on North Korea, it is very limited. If Russia wants to interact on the matter, we should do it with China, rather than with those six countries."

"Can you give a forecast of how the situation will be developing? Pyongyang periodically makes the South Korea and the USA very nervous."

"I think the state of affairs will get stalled at where it is now. The Chinese will make a few statements, but nothing is going to change."

Pravda.Ru also turned to the head of the School of Oriental Studies at the Higher School of Economics, professor, Doctor of Historical Sciences, Alexei Maslov.

"Firstly, the format of six-party talks has not been very successful lately. The countries pursue their own interests. On the one hand, there is China and Russia, on the other hand, there is the US, Japan, South Korea, and all of these countries suggest different methods. The format of the group of six has slightly shrunk, including to the level of foreign ministers and special representatives. Formally, the group of six is alive, but it does not solve common problems. It is highly important to hear what North Korea has to say on the subject."

"Why isn't Russia participating in the discussion of the North Korean nuclear program?"

"The most positive outcome that we have seen so far is that there is no military action going on. Russia can not play an important role here, but maybe it is better for Russia to stay away from taking any actions. Russia, apparently, remains the only unused party to the conflict that could play a role of either a peacemaker or a mediator."

"What measures to prevent the development of the North Korean nuclear program can the participants of the meeting at the UN Security Council take? Sanctions or intimidation?"

'They already conduct actions of intimidation. The USA and South Korea hold joint drills, the USA sends aircraft carriers to the Korean Peninsula. As for sanctions, the only way is to block financial flows to and from North Korea. Today, the main channel of supplies (both food and finance) is, of course. China.

"Apparently, China does not want to block supply channels to North Korea to its own advantage.  First and foremost, one needs to have a clear understanding of what North Korea wants in exchange - the country has not put forward any conditions yet. Secondly, one needs to make China put more pressure on North Korea."