Bombing of Yugoslavia killed Russia's relations with the West

The bombing of Yugoslavia on March 24, 1999 was launched at the time when Russia was a weak country that could not interfere to stop the aggression of the West. Most Russians disapproved  another "Drang Nach Osten" of the West bypassing the UN sanction. In addition, the bombing of Yugoslavia triggered the split of the Russian elite into national traitors and patriots. 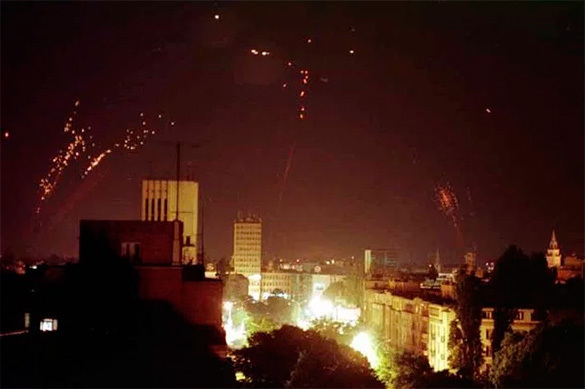 Eighteen years ago, there was no Putin either for Russia or for the civilized West. "Who is Mr. Putin?" international political brand appeared nearly a year later. The day of March 24, 1999 was marked with the historical decision made by then-Prime Minister Yevgeny Primakov, when he ordered to perform the renowned U-turn maneuver over the Atlantic Ocean. The Russian plane was flying back at the time when Western bombs were killing again.

It appears, though, that the main U-turn of those years was not about the U-turn above the geographical Atlantic Ocean. The U-turn in the minds of Russian liberal intelligentsia was much more important.

On March 24, 1999, when NATO launched its military operation against the Federal Republic of Yugoslavia, the progressive and pro-Western Russian intelligentsia experienced an incredible shock. The West that used to be Russia's friend and partner, suddenly turned into a Russophobian killer. The day when NATO started killing citizens of Yugoslavia, the Russian intelligentsia split into the newly emerged "Westerners" and "Slavophiles."

Operation Union Force (NATO reporting name) or Merciful Angel (USA reporting name) - the military operation of the NATO bloc against the Federal Republic of Yugoslavia - was carried out from March 24 till June 10, 1999. All Asian invaders, including Mongol-Tatars or Huns, would commit barbaric actions - they would seize and rob. Western barbarians would give either purely arithmetical names or nice metaphors to their hostile actions - first crusade, second crusade, or "Desert Storm" (that storm was like a storm in a glass of water, if it was not for numerous victims).

In the USSR, when party officials would strangle freethinking, most people would turn to the "voice from the West. The Soviet press would not say a thing, but voices from the West were there to speak the truth. The majority of Russian intelligentsia was looking up to the West. It would never occur for anyone of them that the West was "dead." Instead, the Russians were looking for a breath of fresh air that, as they thought, they could find only in the West. The air, as it turned out, was not fresh at all, it was stinky as hell.

The Soviet intellectual, who would criticize Soviet power in the kitchen and sympathize with the supposedly "free" Western world, disappeared when bombs started falling on Yugoslavia. A Russian person is often naïve. If a Russian does not find truth on earth, he will be looking for it either in heaven or somewhere else. "Homo Sovetikus" started looking for the truth in the West - they did not turn to Holy Scripture or Marx's "Capital."

The crisis in relations with the West and NATO did not start at the time when Vladimir Putin came to power in Russia. It did not start after Russia reunited with the Crimea or after Novorossiya was created. The crisis in Russia's relations with the West began with the bombing of Yugoslavia nearly 20 years ago. Before March 1999, the West had plenty of true supporters in Russia. Today, the West can find here either a Ukrainian Mazepa or a biblical Judas. Needless to say that one can buy Judas for a handful of coins to then hang him on a fig tree.