It appears that the level of democracy in the European Union nears that in Turkey. The European Parliament readies to withdraw immunity from National Front leader Marine Le Pen and put her on trial for the tweet that she made two years ago. The irony of the situation is the fact that Marine Le Pen is a presidential candidate, and she has good chances to become France's next president. 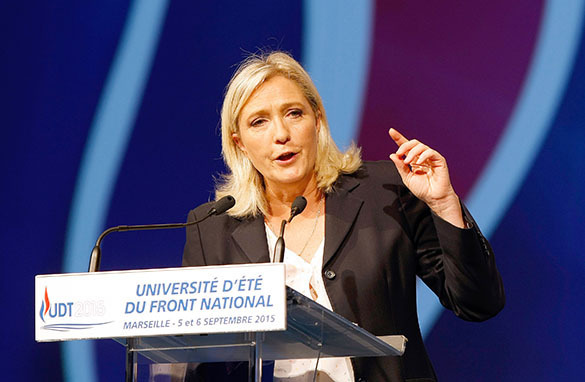 Until recently, it was generally believed that such measures of political struggle were more characteristic of the  countries that allegedly suffer from the "shortage" of democracy. For example, the European Union and the European Parliament have condemned Turkey for prosecuting those who make "undesirable" posts on social media. Indeed, the Turkish authorities have prosecuted ordinary mortals, as well as journalists and politicians for their posts on social media.

It seems that the European political establishment finds such measures highly efficient in a situation that one can now eyewitness in the French presidential race. A recent study conducted by BVA-Salesforce showed that Marine Le Pen, who chairs the French National Front, has all chances to win in the first round of the presidential election.

The level of her support in France has recently grown by 2.5 percent to 27.5 percent, while Le Pen's rivals - centrist Emmanuel Macron and conservative Francois Fillon - have lost one percent each.

Why do they fear Marine Le Pen's victory in the French presidential election? One shall assume that the fear is not based on clichés, such as 'ultra-right nationalists' or even 'fascists.' There is a court ruling in France in accordance with which one is allowed to call Le Pen's movement like that.  Europe does not fear rightist forces per se - Europe is afraid of the collapse of its illusions. Marine Le Pen's victory in the presidential election will bury the cherished illusion of the European Union. The head of the French National Front promised that she would take France out of the EU, if she takes office as president. If France is next after Britain, it would only mean that the EU is falling apart like a house of cards.

Le Pen's victory would mark the collapse of the entire multi-million-euro bureaucracy that profits from the struggle against corruption in Romania and Bulgaria, raises "insufficiently democratic" states, such as Turkey, creates "boundless prospects for European integration (Georgia, Ukraine), fuels anti-Russian hysteria and earns on the influx of millions of migrants. All this will end, if Marine Le Pen wins the election in France.

The goal is not to let her win, at all costs.

"They will try to stop Le Pen. They will not kill her, of course, but they will take every effort to make her leave the pre-election race. If she wins, France will explode the European "reactor," literary critic and blogger Yves Obe told Pravda.Ru.

Of course, there are humane methods in modern Europe, other than assassinations, to remove a political opponent. France's sitting Prime Minister Bernard Cazeneuve has launched a campaign against the officially registered presidential candidate.

"It's my responsibility to do everything to demonstrate to the French that FN's proposals are a dead-end hidden behind lies," Cazeneuve told France's Journal du Dimanche before embarking on a tour of the territories of France where Le Pen enjoys support. He intends to prove it to French electors that if they vote for the leader of the National Front, they may cause both France and the EU irreparable damage.

In 2015, the head of the National Front tweeted a photo of the crimes committed by ISIL terrorists (the terrorist organization is banned in Russia). Prosecutors believe that Le Pen's post on Twitter was propagating violence. Le Pen's opponents are glad to gain advantage of even rotten facts, especially if they are unable not find any other reason to take Marine Le Pen to court.

It just so happens that we are witnessing an  intervention of the European Parliament in the electoral process in France. "Of course, European institutes are involved in the process. This suggests that they have their own views on who is supposed to win the election," Nikolai Litvak, assistant professor of the Department for Philosophy at MGIMO told Pravda.Ru.

Marine Le Pen has been deprived of parliamentary immunity before. It happened in 2013, when she was suspected of inciting religious strife. However, the charges against her were dropped then.

The ongoing scandal may become a very good PR stunt for the National Front unless it ends with a court sentence. If Marine Le Pen is jailed, the EU, at the very least, will lose the right to educate "under-democratic regimes" of how to conduct political struggle.