Turkey and Russia agree on truce plan for Syria, US was not invited 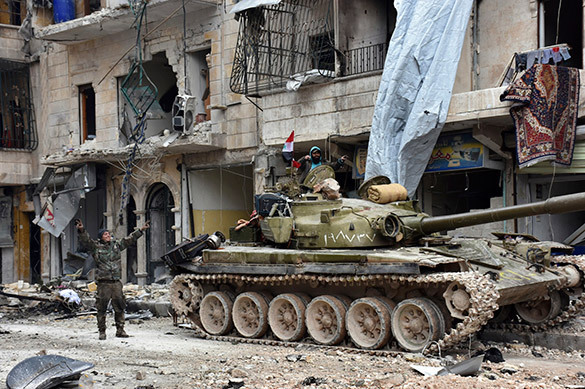 Turkey and Russia have coordinated a comprehensive truce plan, which will be presented to the parties of the conflict in Syria. Following the agreements on cease-fire in eastern Aleppo and the subsequent evacuation of the population and opposition fighters, Ankara and Moscow have agreed a plan that stipulates for the proliferation of the ceasefire regime on the whole territory of Syria.

The action of the agreement will embrace all areas where the fighting between opposition groups and the forces of the Assad regime continues. As part of the agreement between Moscow and Turkey, the parties to the conflict will be asked to stop fighting from 00:00, December 29, Turkish news agency Anadolu reports.

At the same time, the truce agreement does not apply to terrorist organizations.

The agreement has become yet another evidence to prove that the political provocation to undermine the Russian-Turkish relations in Ankara has not worked. Russia's Ambassador to Turkey Andrei Karlov was killed on December 19 in the Modern Art Gallery in Ankara. The killer shot the ambassador in the back during a speech at the opening of the photo exhibition "Russia through Turkish eyes."

Experts believe that organizers of the provocation will not be able to set Turkey and Russia against each other.

"Erdogan is very much concerned. This is evidenced by his phone calls and apologies for the events that have happened. The tragedy that has happened to our ambassador will not create any risks. On the contrary, it will make the dialogue between Russia and Turkey more intense and constructive," Vladimir Gutenev, Chairman of the State Duma Committee on legal support of the development of the defense industry of the Russian Federation, told Pravda.Ru.

This is not the first time, when the United States has not been invited to take part in negotiations on the regulation of the Syrian conflict. In December, foreign ministers of Russia, Iran and Turkey gathered in Moscow to discuss the regulation of the Syrian crisis. At around the same time, defense ministers of the three countries also met in Moscow to discuss the situation in Syria and possible developments after the liberation of Aleppo.

The United States was not invited to negotiate. The New York Times then wrote that the talks had been conducted without the participation of the United States to serve the interests of three countries only. According to American experts, when the Turks, the Iranians and the Russians negotiate the crisis in Syria without the US, it raises serious concerns in Washington."

Earlier, in mid-December, Russia and Turkey signed an agreement on the evacuation of civilians and armed opposition fighters from eastern Aleppo. It was said that the agreement gave many people in eastern Aleppo a chance to survive.