Turkish President Recep Tayyip Erdogan, speaking at a symposium in Istanbul, stated that the Turkish army launched a military operation in Syria to end the rule of Syrian President Bashar al-Assad. 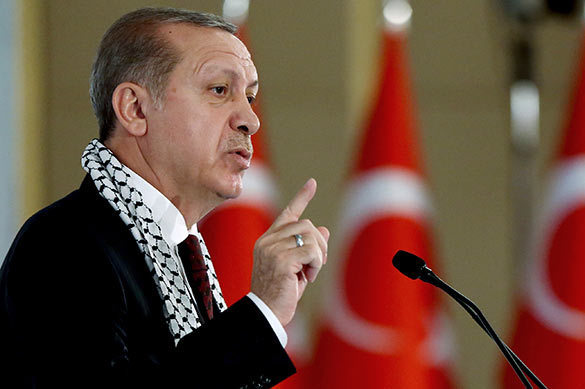 "We are there to restore justice. We entered Syria to put an end to the rule of tyrant Assad, who started state terror in the country. We did not enter for any other reason," Erdogan said.

"Why did we enter? We do not have an eye on Syrian soil. The issue is to provide lands to their real owners. That is to say we are there for the establishment of justice," he added.

The Kremlin was surprises to hear such a statement from the Turkish leader. Putin's official spokesman stated that Erdogan's recent statements on Syria came contrary to what he had said before. Peskov stressed out that Russian armed forces were staying in Syria on a legitimate basis. The Kremlin hopes, he added, that the Turkish authorities will provide explanations on the subject.

"Turkish President Erdogan said that the purpose of his military action in Syria was the destruction of the Assad regime. What is the purpose of such a statement?"

"On November 24, the Syrian aviation bombed the Turkish unit, which was located 15 kilometers from the town of Al-Bab that ISIL has under control. The unit was making an offensive on the town. In the afternoon of November 24, Erdogan called Putin. The next day, they had another telephone conversation on the subject. A year ago, on November 24, 2015, Turkey shot down the Russian fighter jet. Afterwards, Putin called Rowhani, the Iranian President.

"I think that Erdogan called Putin to find out whether Russia wanted the Syrian aviation to attack the Turkish unit. Most likely, Putin said no, and then they concluded that there was some sort of provocation involved. I believe that the sides came to an agreement that the response to that should be only verbal, without any damage to the Syrian forces and so on. Erdogan's remarks followed soon afterwards.

"This is a form of the political game to prevent other provocative activities and not to let the conflict unfold further. The conflict arises because of the attack of the Syrian forces on the Turkish military group."

"Do you think it can be an element of pressure on Russia: either a union with Iran or with Turkey?"

"No, this is a very subtle game. Turkey needs both Russia and Iran. Many believe today that Turkey is more important for Russia than Russia is for Turkey. Turkey is just as important for Russia, because the conflict with Ukraine is going to last for a very long time, and the West will be using it to its advantage. Sooner or later, Ukraine will cut Russia's gas supplies to Europe in an attempt to isolate Russia even more. The Turkish Stream gas pipeline is extremely important here."