Turkey refuses from operation in Syria

Turkey will not conduct a military operation in Syria without an adequate decision from the international coalition and the UN Security Council, Turkey's permanent representative to the UN Halit Cevik said. 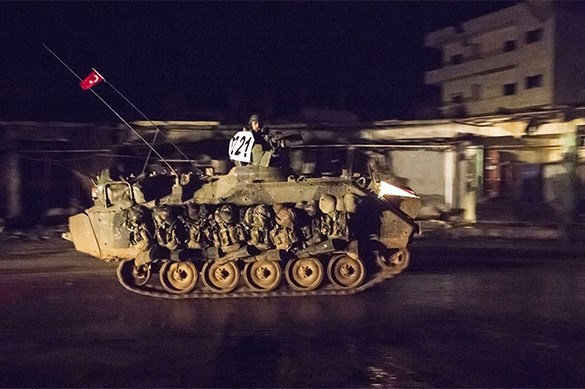 "Turkey is acting under international law. Without the decision of either the international coalition or the UN Security Council we will not take part in ground operations in Syria, Interfax quoted the official as saying.

Cevik stressed out that Turkey supports the territorial integrity and sovereignty of Syria. The diplomat also said that Turkey would use its right for self-defense.

The Kurdish militia that form the military wing of the Syrian Kurdish Democratic Union Party, do not fight against Daesh (aka Islamic State), the Turkish official said.

"The territories that they have seized were under the control of the moderate opposition, rather than of Daesh or Al-Nusra Front. Turkey shells the Syrian territory for self-defense, according to the laws of warfare," said the Turkish diplomat.