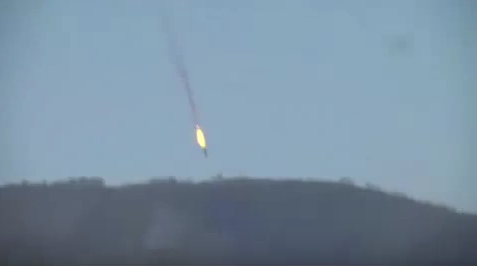 A Russian warplane crashed in Syria near the border with Syria, According to the Russian Defense Ministry, it was a Su-24 jet. The bomber airplane, Russian officials said, was flying above the territory of Syria during its entire flight time. The pilots elected as the aircraft was falling. One of was was reportedly killed, the other one was taken in captivity upon landing, although the information has not received an official confirmation yet.

Turkish TV channel Haberturk TV showed the footage of the plane rapidly falling in flames and spinning in the air. Parachutes were seen in the video, meaning that the pilots ejected indeed.

The incident occurred near the Syrian-Turkish border. Officials representing the Turkish government claimed that two Russian military aircraft violated Turkish airspace, of which the pilots of the planes were warned. Afterwards, one of the planes was shot down and crashed in Syria. Turkish officials confirmed the information. The bomber crashed near the village of Yamadi in the province of Latakia.

Russian Defense Ministry quickly confirmed the loss of the Su-24 bomber. The plane was shot down from an altitude of six thousand meters, officials said.

Two pilots ejected from the falling aircraft, but their fate remains unclear for the time being. According to various reports, one of the Russian pilots was captured by Syrian Turkmens, and the other one may have been killed in the incident. Two Russian helicopters are currently searching for the pilots.

Turkish military officials claim that the Russian bomber violated Turkish airspace, Reuters reports. The Turkish officials informed the plane of the violation ten minutes before it was shot down.

The crash of the Su-24 in Syria that was supposedly shot down by the Turkish Air Force for violating Turkish airspace is a very serious incident, Dmitry Peskov, an official spokesman for Russian President Putin said.

"It would be wrong to give any assessment and assumptions, to make any statements until we have the complete picture of what happened. Therefore, one has to be patient. This is a very serious incident. But, again, without having full information, it is impossible to say something," he said.

Peskov suggested that Russian President Vladimir Putin would discuss the question of the crash of the Russian Su-24 at the negotiations with the King of Jordan, Interfax reports. Dmitry Peskov denied reports of President Putin urgently calling a meeting of the Russian Security Council.

"Turkish media are unlikely to know when and for what reason Putin calls emergency or regular meetings of the Russian Security Council. If any additional activities emerge today or some day soon, we will inform you about it," said Peskov.

The Russian Defense Ministry stressed out that the Russian warplane was flying only above the territory of Syria and did not enter Turkish airspace. Yet, representatives of the Turkish authorities speak of the opposite.

Director of the Center for Public Policy Research, Vladimir Yevseyev, believes that after the incident with the bomber aircraft, Russia has the right to start patrolling the Syrian-Turkish border with interceptor aircraft to prevent such incidents from happening again.

According to Yevseyev, if such an incident happens again, Russia will proceed to taking retaliatory measures against Turkish interceptor aircraft. In addition, Russia may extend the range of air defense in Syria to be able to intercept Turkish military aircraft that reportedly invade the airspace of Syria periodically.

"If Turkey continues its provocative actions, it is highly probable that incidents of this kind may happen again, albeit to Turkish aircraft. If Turkey takes no measures to prevent this kind of incident in the future - there are such agreements between Russia and the United States - then Turkey can expect a very tough response," said Vladimir Yevseyev.

The expert also told Pravda.Ru that this is an unprecedented case that may disrupt the Russian-Turkish summit in Kazan in December.