The Bulgarians have at last faced an opportunity to choose a president who would wish to support friendly relations with Russia and not to kowtow to the EU and NATO. Will Bulgaria make use of this chance to become a sovereign country? Or will there be deployed an extensive demonization program of the candidate from the Left forces Rumen Radev? He believes though that one shouldn't invent an enemy in the person of Russia. 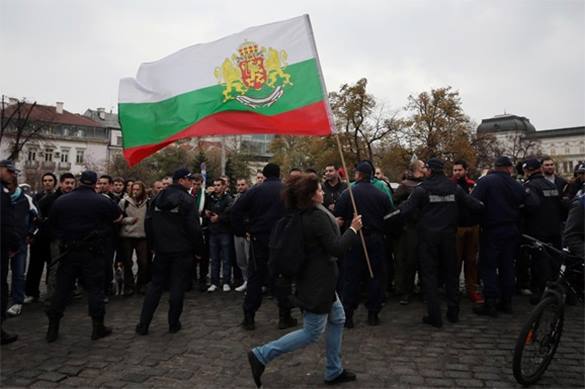 The president will be elected on 6 November. He heads the Armed Forces, appoints key figures in the judicial and security spheres, as well as the interim government. He has veto power.

The Bulgarian Socialist Party has nominated its candidate for the first time. Major General of the Reserve Rumen Radev, who has never been a party member, claimed that he wanted to unite votes of the Left.

Two months ago Radev was Commander of the Bulgarian Air Forces. However, as it turned out that government of Boyko Borisov refused to purchase new aircraft and will pay the Polish Air Forces for providing security of their own sky, Radev resigned in protest.

In an interview with the Bulgarian Trud newspaper, the presidential candidate claimed that his task is to reduce poverty and overcome a sense of impending doom among the Bulgarians. 'People want changes. They want their relatives to return to Bulgaria, to see their children not via Skype only, they want to start their business easily which would not depend on clumsy administration and party racketeers. The Bulgarians will soon come out of televised hypnosis, I'm sure. No country cannot constantly be governed from the TV screens,' he stated.

Radev critically treats NATO. The problem is that the Bulgarian Armed Forces are not regarded as a real guarantor of the national security, Radev is sure. It is constantly implanted in the mind that 'NATO defends us', but it doesn't correspond with the reality, the socialist candidate believes. His opinion on Russia is that: 'We are creating an enemy in a paranoid way and that is destructive for Bulgaria.'

The current authorities of the country have really not only refused from advantageous joint projects such as Belene nuclear power plant and the South Stream recently, but also make overtly hostile statements. The minister of Foreign Affairs Daniel Mitov brought Russia into line with the terror ISIS group among main threats to the foreign policy interests of the EU and Bulgaria.

Another Minister Petre Moskov, who is Minister of Health, claimed unexpectedly, speaking at the Nova TV, that protests against judicial reform which took place in Sofia had been initiated by Russia.

The PM Boyko Borisov reproached Sergey Lavrov for 'the orthodox Russia's selling gas to Bulgaria at the highest price'. Borisov is not embarrassed at all by the fact that at the same time his orthodox president Rosen Plevneliev speaks about Russia's getting ready for hybrid warfare in the Balkans and for a cyber attack against Bulgaria.

Nomination of a standing out candidate in this context has been noticed by the Western mass media. The coming presidential elections in Bulgaria are a tempting opportunity for Russia to try to drag a 'vulnerable' East European country back into its strategic orbit, Politico wrote. The newspaper asserts that Washington is concerned about a new candidate Radev.

And some Jasen Bojadjiev from the Deutsche Welle mocks presidential program of the Socialists 'For Bulgaria, which we love'. The Socialists, according to him, will apologize for 'shameful' and 'treacherous' statement of the current president on annexation of Crimea, will purchase Russian aircraft, join the Eurasian Union and will 'serve the Russian authorities and interests'.

The author has no doubts that under the Socialists, Bulgaria will revive the Belene nuclear power plant and the South stream project, which are to undermine energy security of Bulgaria. Bojadjiev warns that positions of those who want to bring this plan to life are very strong. However the author radiantly looks to the future, he's sure that the Bulgarian youth will not turn off the European road, as 'their parents spend money in Paris and buy houses in London, and on the Riviera, but not in the Moscow region or Crimea.'

Mr Bojadjiev, let me note that under current Bulgaria's role of a stepchild in the EU, with depressive economy and demographic crisis, it's a short-sighted policy to squander such joint projects as the Belene nuclear powr plant and the South Stream gas pipeline.

Belene would eventually provide Bulgaria with possibility to have its own energy powers and would help to get rid of Gazprom. While the south Stream is multi-billion (2.5bln euros per year) transit charges. And the current government of Borisov realizes it.

Beside that, Mr Bojadjiev, a lot of Bulgarians including the young, will support the Socialists and their presidential candidate. This is the youth parents of whom do not buy real estate at all, but live from hand to mouth. To assure yourself of it, you should watch some news about the last summit of Russophiles in Bulgaria, which took place near the Bulgarian city of Kazanlak. If you are not aware, the Russophiles is a civil society organization which comprises over 35,000 people in 224 Bulgarian communities. Leader of the Bulgarian Socialist Party Korneliya Ninova called on the government to lift anti-Russian sanctions: 'It's enough of the treacherous foreign policy, which humbles Bulgaria's decency.'

Fed up with the Right

'The chances of Radev grow up, I go by public mood,' Petko Ganchev, Ph.D, in political science, Chairman of the geopolitical center Eurasia-Sofia, told Pravda.Ru. 'People are fed up with all these Right a-la Boyko Borisov, who say one thing and do another. These are people without principles, without program. Calling Radev a 'pro-Russian' is political manipulations. He is moderate, represents the Socialist party and its interests and there is interest to make friends with Russia, but he is not radical, he is very balanced, attentive and cautious.

According to Ganchev, Rumen Radev has 'taken up the challenge' and is working at restoration of relations with Russia. So, now it's the only politician of such level who is capable of annihilating the gap between the country's authorities who are currently drifting into Russophobia and interests of the Bulgarian people.